Papunya is situated in the remote desert of Central Australia, nestled where the sand hills meet the mountains, 250 kilometres west of Alice Springs. It is defined by the dry red landscape of the desert sand. The summer days are long and hot but during winter the temperature drops, and it can be freezing at night. The Western Desert region occupies almost one-third of the Australian continent and features flood channels, salt lakes, rock formations, caves and sand hills. The area includes desert oak, scrubby flatland, spinifex grass plains, rivers and waterholes and the majestic MacDonnell Ranges. Rain and hail experienced in the colder times fill the waterholes that survive in the heat.

The community at Papunya was established in 1959 as an official government settlement, bringing together nomadic desert people with the aim of assimilation to western living. The site was chosen because of the availability of bore water and is not the traditional region for any of the tribal groups of the surrounding region.1 Many different language groups (including Luritja, Warlpiri, Anmatyerr, Arrente and Pintupi) were brought together, away from their traditional lands. The structure of the community of Papunya, which forced diverse groups to live in close proximity with one another, contributed to social and cultural upheaval.

It was at Papunya in 1971 that school teacher Geoffrey Bardon encouraged the children to paint imagery drawing on their own indigenous tradition, after noticing them making marks in the sand. This led to the school mural project depicting the Honey Ant Dreaming. The concentric circles of the original Honey Ant mural were a bold statement on the school walls. Here, writ large, was a reinforcement of the artist’s culture and connection with country, despite the physical separation. Painted by Kaapa Tjampitjinpa, Billy Stockman Tjapaltjarri, Long Jack Phillipus Tjakamarra, Johnny Warangkula Tjupurrula and Don Ellis Tjapanangka, it was painted over in 1974 in keeping with government designs for a neat and clean schoolyard. 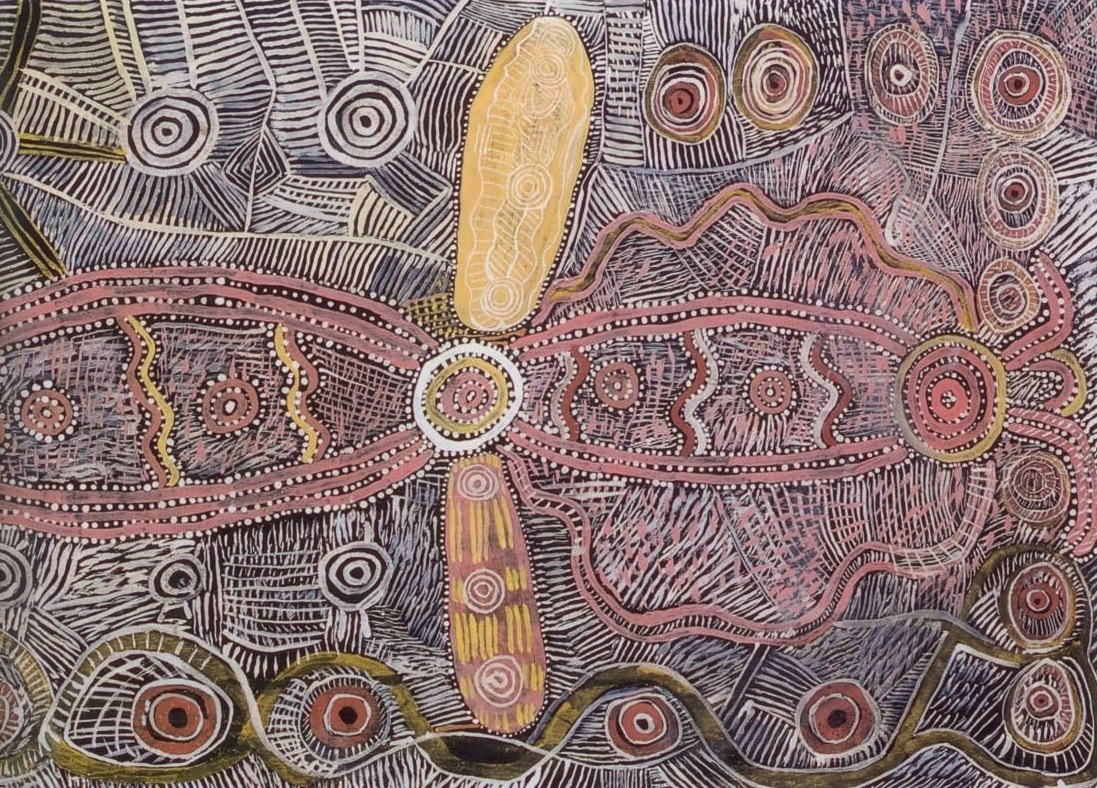 The Honey Ant Mural, in turn, inspired the old men to paint on small boards, depicting the stories of their land, the journeys taken by Creation Ancestors, performing rituals and forming sites, flora and fauna, and laying down social customs and law. An early problem was encountered as the paintings sometimes revealed secret and sacred material in a now permanent form and therefore making it available to the eyes of the uninitiated and women. This saw the rise of background patterning and dots to obscure any such content, acting as a screening device. The use of dots allowed a brilliant shimmering effect. These early works are the foundation of the Western Desert art movement.

The early enthusiasm of the artists meant that paintings were often painted on those supports that were readily available, such as linoleum tiles, cardboard, chipboard, plywood and fruit box ends. These works are vibrant and vigorous and often painted on a plain red or black background upon which the artist made their mark.

The sheer output of paintings led to Geoffrey Bardon selecting works for sale in Alice Springs. Papunya Artists Co-operative was established in October 1971 under the directive of the Papunya School. Bardon discusses the movement:

“the formation of the co-operative owed nothing at all to the government policies at that time and was in fact in opposition to Commonwealth Government policies which aimed at terminating Aboriginal traditional life, culture and languages.”2

The acclaim for the early paintings grew with the establishment of Papunya Tula Artists Pty Ltd in June 1972.

It was not until late 1972 that canvas was first introduced allowing a greater scale, more akin to ceremonial sand painting but on a flat surface in two-dimensional form and for a public audience. They can be read like a map of an artist’s country, often outlining ancestral journeys in the tracks, lines, arcs and dots.

An important aspect of painting at Papunya was the concern to document the works, initiated by Geoffrey Bardon. The recording of a narrative component and interpreting the symbols used added to a greater understanding and appreciation of the artwork and is still a significant element accompanying the painting.

The 1980s and 1990s saw the trend towards greater minimalism. Such paintings are particularly successful as pure abstract art on the international stage, however are in fact strongly rooted in culture and depictions of an artist’s country.

The growing strength in land rights in the 1970s and 1980s saw many Pintupi people move back to homelands in western central Australia. Papunya Tula Artists extended their reach to support artists moving to their homelands. By 1981 there were more than 300 people living at Kintore and by 1985 a larger number had settled further west at Kiwirrkura. At first, mostly senior men painted, including some who had previously painted at Papunya. Over the next couple of years, the number of artists quickly grew from the initial dozen to over forty men. Many women now paint as well, some assisting their men folk and were also supported by neighbouring women artists at Haasts Bluff.

Today there are still around forty shareholder members of Papunya Tula. The number of artists who paint for Papunya Tula, which now also includes women, fluctuates and can be up to eighty artists at a time. Papunya Tula Artists continues to be Aboriginal owned and run. Dedicated arts advisors have included Peter Fannin, Dick Kimber, Janet Wilson, John Kean, Andrew Crocker, Daphne Williams, and Paul Sweeney.

Bardon, Geoffrey and Bardon, James, Papunya, a place made after the story, the beginnings of the Western Desert painting movement, The Miegunyah Press, 2004

Dot and Circle, a retrospective survey of the Aboriginal acrylic paintings of Central Australia, Royal Melbourne Institute of Technology, 1986

Dreamings of the Desert Aboriginal dot paintings of the Western Desert, Art Gallery of South Australia, 1996

The Face of the Centre Papunya Tula Paintings 1971-84, National Gallery of Victoria, 1986