The Wessel Island group, consisting of a chain of 35 islands, including Elcho Island, is located off the marshy coastline of the North Eastern tip of Arnhem Land in the Arafura Sea. Elcho Island is 550 kilometres northeast of Darwin. A mere fifty kilometres long and six kilometres wide, the island is naturally beautiful with varying terrain ranging from rainforests and creeks to curving, sandy beaches, walled by bright red cliffs. The ochre rocks found in these cliffs are used for both commercial painting and body paint for ceremonies. The east coast shore of mud and lush mangroves is a natural habitat for the local favourite food – the mud crab and barramundi. The west shoreline lined with sandy beaches and reefs supports a home ground for crayfish, reef fish, turtles and oysters. The island is rich in reeds and trees, a source for making rope and nets for fishing as well as arts and crafts.

Galiwin’ku, located near the island’s southern tip, is the main community. It is the largest Aboriginal centre in Northeast Arnhem Land and the second largest Aboriginal community (in terms of concentrated population) in the Northern Territory, with a population of over 2,000 people. Forty-eight per cent of the population is under 20 years of age, with 7% over 50. Elcho is also the home of the Aboriginal folk musician Geoffrey Gurrumul Yunupingu.

Historically, Macassan fisherman from Indonesia, in their search for trepang (sea slugs) had visited Australian shores yearly between December and April. As a result of these regular visits, some of the Macassan men ‘married’ Aboriginal women and fathered children, the descendants of whom can be found today. The Galiwin’ku community established by a Methodist Church in 1942 was passed into control of the local Yolngu in 1974.

There are a large number of tribal groups, with up to 22 different dialects in use. The most commonly spoken languages are Djambarrpuyngu, Gupapuyngu, Warramiri and Galpu. There is also lingering evidence of Macassan contact in certain words, such as rupiya, the word for money, wukiri meaning to write, djama meaning to work, and bilina to finish. This history is recorded through both the oral stories of today’s Galiwin’ku peoples and through anthropological studies.

Yolngu art, as practised by the Dhuwa and Yirritja moieties of Arnhem Land, is passed down through the generations acting as the bond with the guiding spirit of the past, present and future. Everyone and every useful thing found in nature – Ancestral Spirit Beings, clan groups, areas of land and water, animals, plants, totems, songs, ceremonies – is either Dhuwa or Yirritja. Based on designs, which originate from ancestral beings, these objects of art take on the spirit of these ancestors and form an important relationship to the culture. The inheritance of these designs includes a link with place, colour, plants and wildlife. When combined in ceremony of song and dance, they become important in the initiation of the youth and the relationships between people and the land.

Elcho Island enjoys a strong reputation in the use of traditional materials including ochres, bark, clan totems and original design. The area is particularly known for bark paintings and Morning Star Poles. 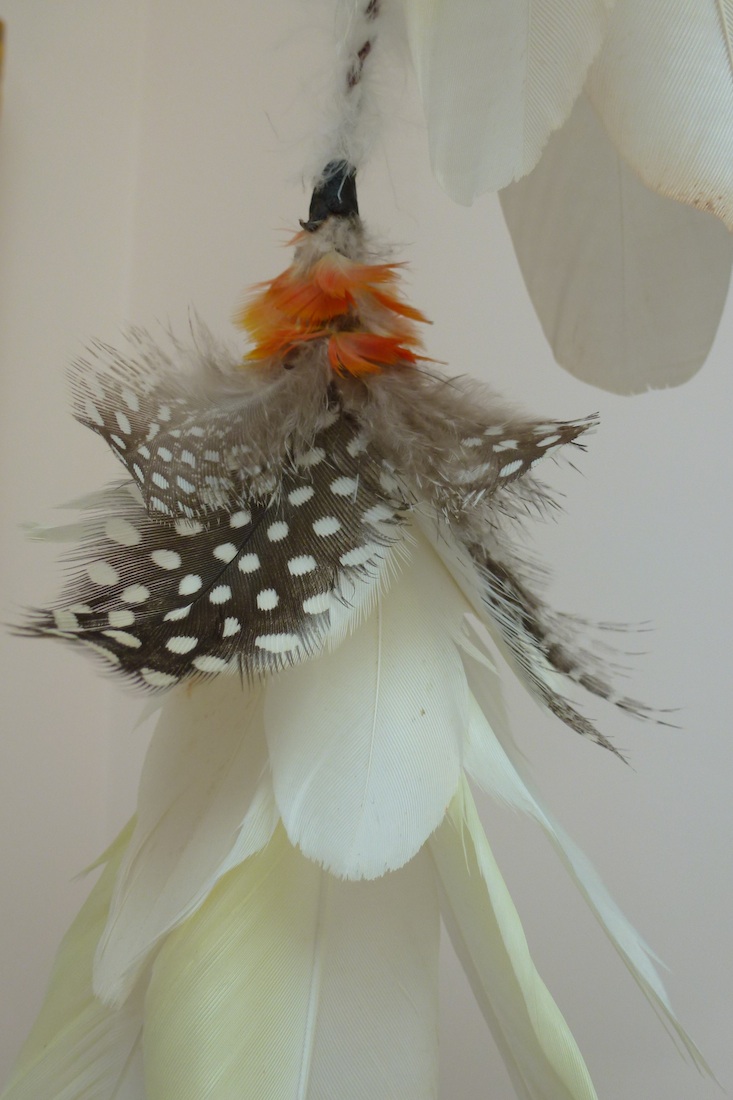 Morning Star Poles have an integral part in traditional narratives and are significant items in ceremonies, particularly burial ceremonies. Along with the songs and dances, they link the disparate groups through the social obligations of the occasion, but also importantly, they share the stories of the ancestors, informing the younger generation on culture. The poles are made with a variety of materials, including fibre string, feathers, native beeswax, hair of family members, synthetic paints, as well as natural pigment. There are variations to the narrative, however, the most common account has the feathered strings representing the rays of Banumbirr the star,1 along which the souls climb to their final resting place. The feathers at the end represent the heart of the star where the souls of the people go; from here they watch over their family until they meet again.

Arts and crafts produced on Elcho Island consist of fibre art made from Pandanus palm fronds, which can include mats, dilly bags and baskets. Paintings are usually made with natural ochres on barks or synthetic polymer paints and ochres on canvas or paper. 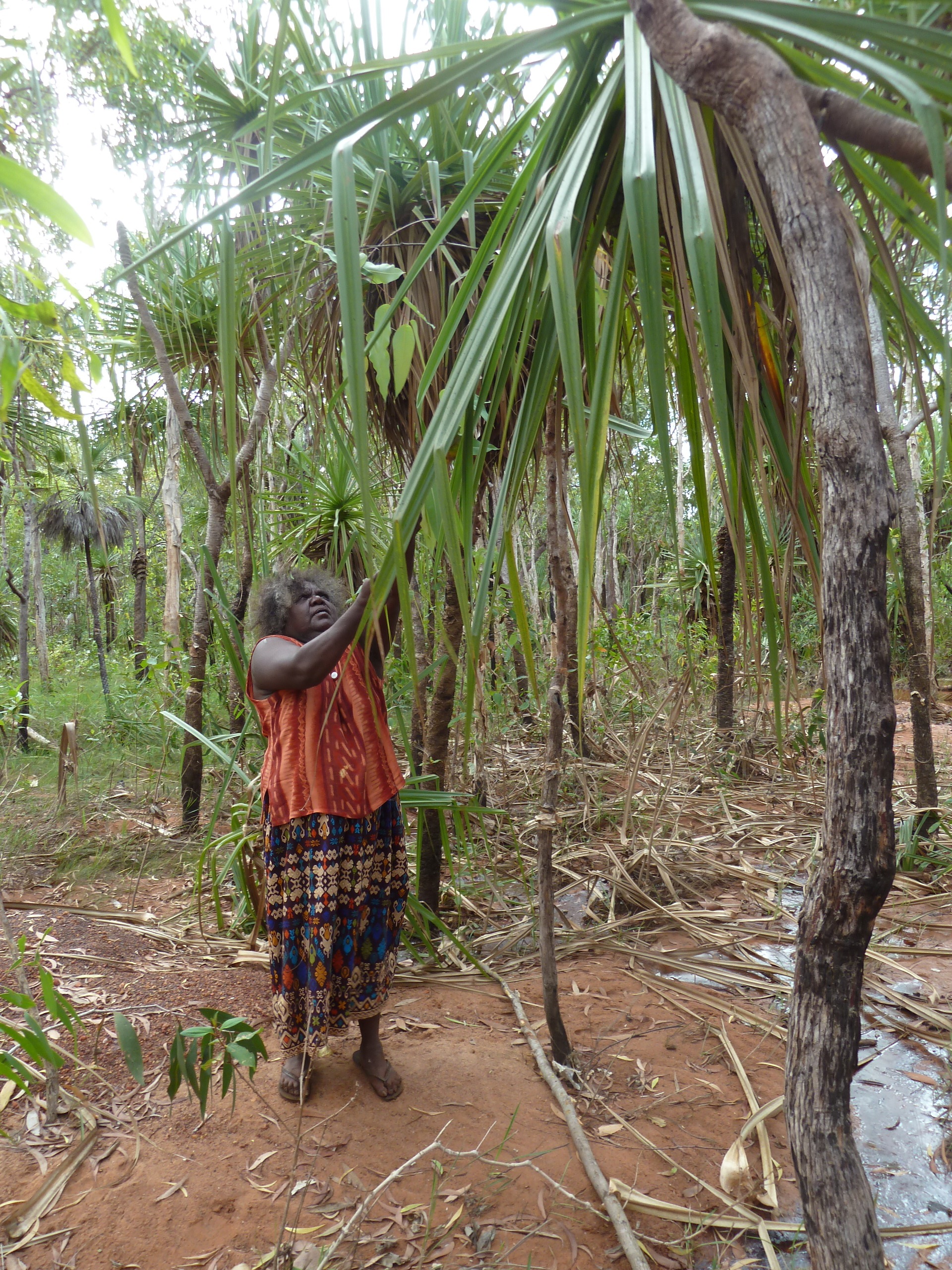 The string plays an important spiritual role as well as a practical role in the lives of the Galiwin’ku people. Its history and significance is told through stories about the deeds and travels of the ancestors. The string known as raki is made using ancient techniques; the women are the primary makers of string, gathering materials from the Galiwin’ku bush land and beach areas. Materials could include anything from bark fibres, vines, fur or human hair; these are then twined into a rope like item. Feathers are often incorporated for contrast and colour, and wound around the poles, guiding the spirits from earth to the star. The string may also be used in the making of fishing nets, string bags, and binding.

The Elcho Island Arts Centre operates out of the Marthakal Arts Hub and is essential in helping the community maintain a connection to the Yolngu culture and traditions. Located on a cliff in the area known as the Eagle’s Nest, south east of the Galiwin’ku town centre, the location is spectacular with beautiful and wide views of Mission Beach and Abbott Island. The Centre is owned by the Galiwin’ku Community Council and has been managed by the community since 1992. It employs both Indigenous and non–Indigenous staff and represents more than 125 artists as well as securing the works of deceased artists for safe keeping on behalf of the community. 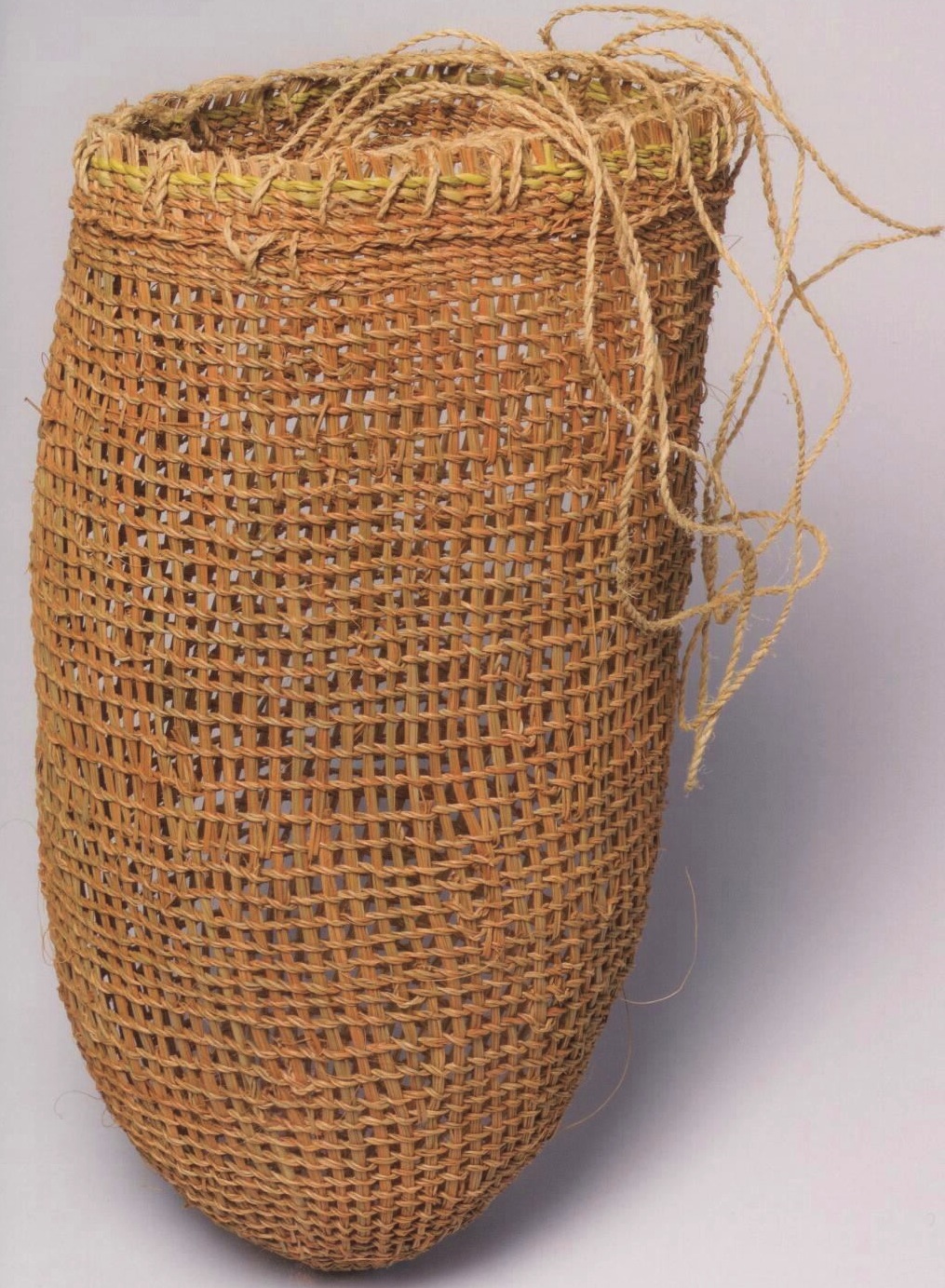 Sisters, the Morning Star travels from one Dhuwa country to another and it heralds the breaking of the dawn, threading together in narrative, these disparate sites and people. The Morning Star story is multi-faceted linking to many aspects of Yolngu society. One aspect centres around a canoe journey made by a man named Yawulngura to Burralku, where people of the Dhuwa moiety expect to go when they die. It accounts for the various experiences he encounters. Other aspects tell of the Morning Star being kept by an old woman in her basket.2 Every morning just before dawn, she would let it out on a long string so it could fly up and over Arnhem Land announcing the new day. As the sun appears the old woman draws the star back on the string and packs it away in her basket.

Banumbirr is one point of the cosmos through which the celebration of relationships and hence of identity is focussed. The ‘star’ is seen as coming out from below the horizon in the east just before dawn, as being the herald of day. As the sun rises, Banumbirr is seen ‘as going back inside’. Its daily coming out and returning are confirmation that the whole cosmos can be trusted to remain as it always has, without change. This coming out and going is suggested to be a metaphor for fertility and birth, as a child comes to its mother and is born. Finally the return of the star to Burralku, deals again with the return to the inside, as the person comes to the end of life. Overall, Banunbirr is used as a presentation of the structure of the Yolgu cosmos.

Senior custodian, Terry Dhurritjini Yumbulul3 explains that the Morning Star is a Dhuwa object, and that his right to make it and decorate it, is inherited by the artist through his mother’s clan, the Galpu people. Further, different patterns are painted along the shaft depending on the clan and place within the clan that the person holds. Some Morning Star Poles depict the yam root with the leaves and flowers growing from it and decorating the pole. On one level, the climbing vine represents the spirit reaching towards the star, however there is a deeper level of meaning, which is indicated by the borders and the bunched up feather works which denote more complex stories. In these instances, the stories may be about the flowering of life and the essence of femininity.

Terry Dhurritjini Yumbulul, of Wigram Island, in the Wessel Island group, is widely recognised for his Morning Star Poles and sculptures relating to marine creatures and mythology. As the custodian, Terry is the only one of his clan permitted to paint all the sacred images, according to the tradition passed down by his father and grandfather before him. Terry’s artworks depict creation stories of these areas, which he chooses to share in the hope of bridging the Indigenous and non-Indigenous cultures in Australia.

Terry creates his sculptures from local trees (often stinkwood) and his use of canvas for paintings, rather than traditional bark, is a concession to the need for conservation and a more efficient, lasting material. He does however, maintain the tradition of bark painting in his use of natural ochres in the traditional colours of his Warramiri Clan – red from Wessell Island, yellow from Elcho Island, black from Groote Eylandt and white from a site near Mica Beach, believing these colours to be the colours of Australia which should be enjoyed by all.

As the tribal elder, he has the right and responsibility to perform funeral ceremonies. When important or highly respected members of the tribe are buried, Terry wears a significant costume decorated with feathers and carries the Dhukung or sceptre, which is only used if there is trouble at a ceremony and is brought out to make a statement.

The Dhukung (or Dhukun) is used by Yirritja people in ceremonial occasions to uphold the law of the land. The Dhuwa version is decorated with fluff called Rraman and may have shorter strings attached, this is called a Djuta or Wapitja. The Yirritja version often is decorated with fluff called rrandjini and feature either a face, a tail or a divided point, symbolising birth, life and death. 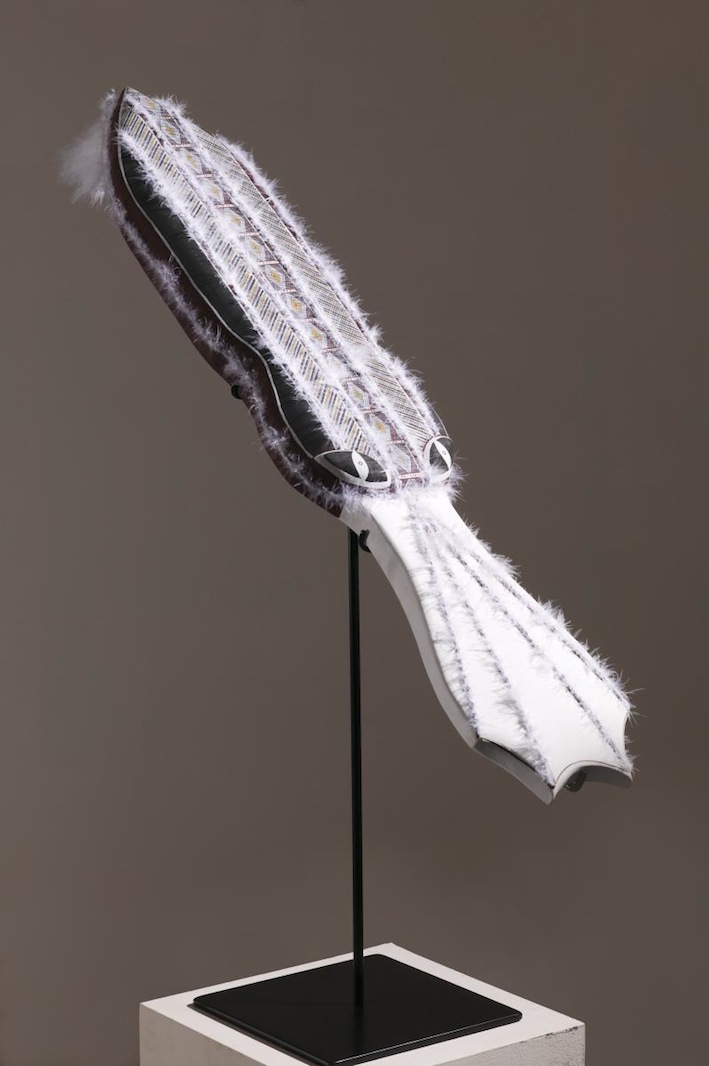 Sculpture is a feature of Terry’s work and includes Limmen (The Squid). It is decorated to represent the wave pattern movement as it swims and the microscopic patterns represent the formation of the reef, which is its home. Further, it represents an Ancestral Spirit Being, the custodian or guardian of the reef, which looks out over the reef and protects the area. As a custodian, Limmen also represent an authority over the laws of the Yirritja people. In another sense, he may be described as a guardian angel. The physical being of the sculpture represents “a belief you can hold” – the belief is within a person but the sculpture allows a concrete manifestation which people can see and touch, especially at ceremonial occasions.

When the world was created, the first life or breath began in the water of the ocean. Then the water in the sky came. The trees were pulled down and pushed by the force and current of the sweet water (fresh water), and as they were pushed, rivers were created. This object was pushed and reached the bottom of the river where the sweet (fresh) and salt water met and a cloud was formed. A lake was then created and it became human at the beginning or development stage. When the object reached the salt water it turned around and said: Now, I’ve reached the sea. The object formed legs as salt water gives life. It placed its legs astride which were then stuck to the ground and raised its arms up overhead and said “Now I’m marryialyun – god of love” – pure love for nature.