The Shire of Ngaanyatjarraku, based at Warburton, is home to ten communities scattered over almost 160,000 square kilometres between the Rawlinson Ranges and the Gibson Desert. The Warburton Arts Project, Irrunytju Arts, Kayili Artists and Papulankutja Artists – based at Warburton, Wingella, Patjarr and Blackstone respectively – are the main art centres in the region. The Ngaanyatjarraku landscape is coloured by distinctive red sand and diverse desert flora and fauna. 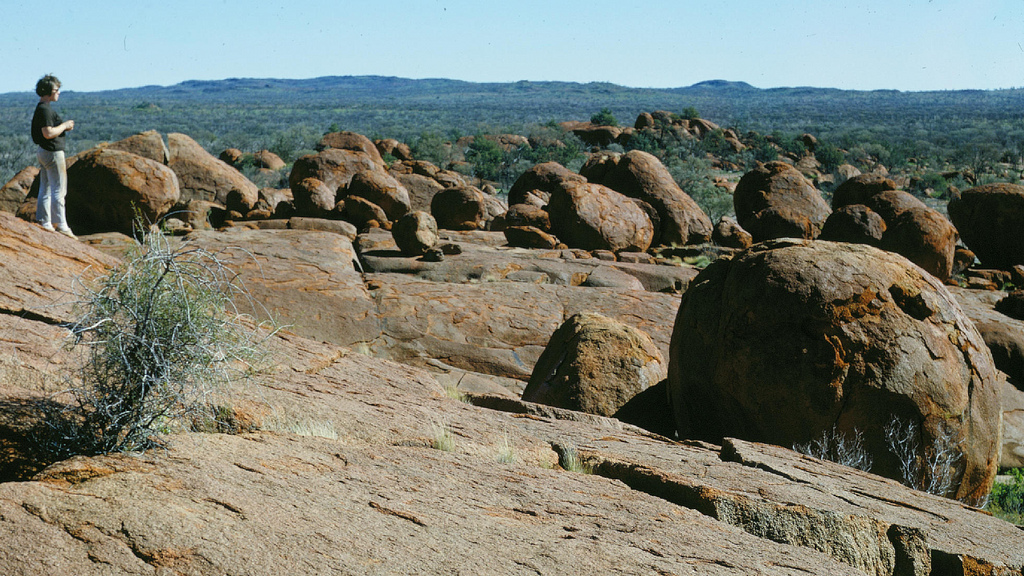 The majority of people speak Ngaanyatjarra as their first language and others speak the closely related Western Desert dialects including Pitjantjatjara and Pintupi.

The many peoples of this area share a common history although they see themselves as separate communities. They are connected by the landscape of the Warburton area, which borders Western Australia, South Australia and the Northern Territory. This immense space encompasses the Great Sandy, Great Victoria, and Gibson Deserts.

Warburton (or Mirlirrtjarra) was the first of the Ngaanyatjarraku communities to be established. The community – named after the Warburton Ranges – was established as a United Aborigines Mission (UAM) in 1934.

With the establishment of the mission, the local population gradually rejected aspects of their nomadic, subsistence society. Particularly following a prolonged drought, the promise of food, blankets, medicine and other items drew people to the mission. The UAM established education, employment and training programs for the local population, contrary to government policy at the time. By the 1950s, however, the government began to provide funding to the mission in the form of rations.1

In the 1950s and 1960s, nuclear testing by the British Government at Maralinga, in South Australia, had a profound impact of the Ngaatjatjarra, Pitjantjatjara and Spinifex people. Traditional homelands were badly contaminated and the people lost access to their land and sought refuge in the missions at Ernabella, Warburton and Cundalee.2

The remoteness of the region and the lack of government funding resulted in minimal government interference during the period of assimilation. From the 1970s, government policy moved towards self-determination and management. In 1973, the United Aborigines Mission relinquished control of Warburton to the wholly elected Aboriginal council of the Incorporated Warburton Aboriginal Community.3

In 1975 several family groups with ties to the area of the Blackstone Ranges moved back to their land and established a community. Traditional forms of art practice – such as woodcarvings and fibre works – were maintained and were created at the local Women’s Centre.

The medium of painting on canvas emerged much later in this region than other parts of the Western Desert, probably due to the extreme remoteness of the communities and due to conservatism in the community.4 Painting on canvas was also initially discouraged lest it would interfere or undermine the production of wooden carvings and batik. There was also a view that paintings on canvas that depicted Tjukurpa (Dreaming Law) would disclose sacred law to uninitiated outsiders.5

In 1990, the Warburton Arts Project was formed to explore new creative options, mediums and techniques for producing art. The program was primarily a painting on canvas project with the objective to preserve the rock art sites and produce art for ceremonial purposes.6 The project resulted in the production of many large canvases which are now owned by the community and stored within the Warburton Cultural Centre. These brilliantly coloured works – largely painted by the senior women – resulted in a resurgence of traditional culture and the development of painting. 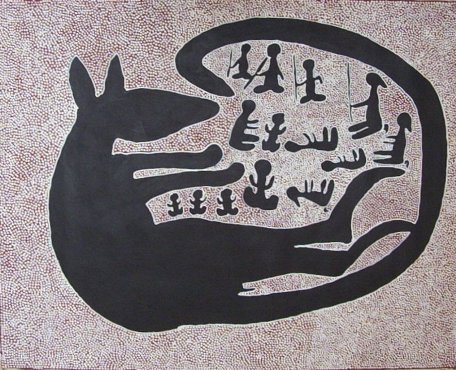 An effect felt not only at Warburton, but also within the outlying communities of Patyarr and Papulankutja.7

Warburton Arts Project has since developed many different projects including the development of Warburton Community’s art glass facility in 1993 and a rock art program in 1992.

Papulankutja is located north of the Blackstone Ranges, between the Western and Great Victorian deserts. Many of the residents grew up at either Ernabella Mission or Warburton Mission. The community was established when the local camp of the Southwestern Mining Group at Tollu, just south of the Blackstone Ranges, was abandoned. The remaining camp materials were collected by the local population and brought to the bore at Blackstone. The community was incorporated in 1976.

Papulankutja Artists developed out of the Blackstone women’s centre and was established in 2001. The artworks of Papulankutja Artists are known for their strong brushstrokes and vivid colours as well as carved wooden sculptures. The centre also developed the unique Spinifex Paper Project, where artists – using the abundance of spinifex grasses growing in the region – created handmade paper on which to paint.8 The Tjanpi Desert Weavers – who won the 2005 National Aboriginal and Torres Strait Islander Awards with their Tjanpi Grass Toyota –arose out of a basket-weaving workshop at Papulankutja in 1995.9

Marks from the ceremonial body paintings and rock art are the inspiration behind the acrylic works. The important stories of Wati Kutjarra (Two Men), Kungkarrakalpa (Seven Sisters) and Pukara (waterhole) feature in the works of the Papulankutja artists.

Kayili Artists is located within the Patjarr (Karilywara) Community and was established in 2004. The art centre is situated within the Gibson Desert, approximately 240 kilometres north of Warburton. Patjarr Creek is an important water source for the community, and consequently is often depicted in Kayili artworks. The stories of the Tjukurpa ancestors creating the land also feature prominently in their artworks.10

The paintings by Kayili artists are striking for their brilliant colours, but are also very traditional in their depictions of Tjukurrpa.11 The influence of the neighbouring Warburton Arts Project is seen in the acceptance by many artists of the new medium of acrylic paint on canvas. In collaboration with the Warburton Arts Projects, a selection of Kayili artists – Pulpurru Davies, Fred Ward and Arthur Robertson – also created glass panels installed at Parliament House, Perth.

The Irrunytju Community based at Wingellina in Western Australia, was established by miners in 1960s. The community was incorporated in 1976 following the return of peoples with traditional links to the land.12 It is situated at the junction of the borders of Western Australia, South Australia and the Northern Territory.

Irrunytju Arts began as a response to community needs for an arts and cultural centre in 2001. The community was initially unsuccessful in securing government funds to establish the centre. The funds for art materials or running costs are generated through a second-hand shop in the community hall and from the sale of bush medicine, dyed raffia and baskets.

Brokensha, Peter, The Pitjantjatjara and their crafts, The Aboriginal Arts Board, Australia Council, 1975