The term ‘urban’ art mainly refers to artists working in major capital cities and within the general Australian contemporary arts scene, as opposed to those in Aboriginal communities, who may be seen working in a more ‘traditional’ framework. Much urban art deals with social and cultural issues and makes important political statements focussing on, for example, the stolen generation, land rights, and reconciliation. There also tends to be a probing nature to the art: a questioning of identity or a challenge to colonial accounts of Australian history. ‘Urban’ art is often provocative, confronting, humorous and playful. Those artists under the umbrella of ‘urban’ art are both self-taught and professionally trained, and use multiple forms of media.

A greater level of interest and funding in Indigenous arts from the 1960s saw a rise in printmaking, photography, ceramics, and painting. The introduction of different materials, such as the watercolours in Hermannsburg, the use of acrylic (synthetic polymer) paint from the 1970s and the introduction of batik, contributed to a shift in Indigenous artists’ approach to their practice. There has also been a shift in Western attitude from understanding Aboriginal art as ethnographic material to recognition of its place on the international contemporary art stage.

The Koori Art exhibition held in 1984 at Contemporary Art Space in Sydney provided a focus for urban indigenous art, bringing together black artists who had been working in isolation but who had important common links. The exhibition also brought these artists to the attention of public art institutions. For some urban artists, the importance of travelling to Aboriginal communities, meeting with Aboriginal people and being exposed to a more traditional lifestyle has provided an important inspiration for their art.

The bicentennial of the official European landing in 1988 was celebrated as a nationwide commemorative event, although for Aboriginal people, the year was one of mourning. The cultural difference in the perception of this historic event was a watershed moment. Many city-based artists responded to this divergence and embraced different mediums to express their indictment of the European settlement of Australia.

Art and the Artists

Brisbane-born artist Tracey Moffatt (1960-) was a pioneer of photography and video art. She is one of Australia’s most internationally recognised artists. Her now iconic image Something More #1 1989, shows the artist in a torn red cheongsam dress in an outback colonial setting. In this series Moffatt references the dislocation and oppression of the colonised, and explores issues of race and gender in Australian history and society. Moffatt, like other artists of Indigenous-heritage such as Gordon Bennett, prefers to place her work more broadly in the context of Australian contemporary art.

Gordon Bennett (1955-) is an artist based in Brisbane, who works in the context of the postmodernist art movement. Bennett uses the postmodernist techniques of appropriation, irony and pastiche to comment on race relations in Australia. Bennett’s Australian Icon (Notes of Perception No. 6) 1989 is an early example of his iconic and celebrated style. 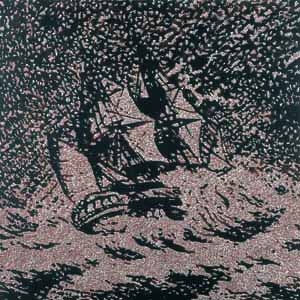 The series is a critical response to the Bicentennial celebrations in 1988. In particular, Bennett uses the image of the tall ship that sailed into Sydney Harbour in 1788, and again in 1988 as part of the Bicentennial celebrations, to comment of the Australian colonial identity. Such an image has entered the collective unconscious of Australian identity, reinforced in its representation in social history books. The inversion of colour and space of the painting inverts the romantic view of the explorers and colonists of the First Fleet arriving on Australia’s shores with the experience of the Aboriginal people viewing the approaching alien vessel. This difference of perception of imagery or an event is hinted to in the title. The ship is composed of a series of small dots – almost like pixels – which further deny solidity to the symbol of the ship.

Richard Bell (1953-), also based in Queensland, uses wordplay and graffiti imagery to comment on race relations, Indigenous society and questions the materialistic framework of contemporary Indigenous art. His painting, Scientia e metaphysica (Bell’s Theorem), which won the 2005 Telstra Painting Award, comments directly on the latter issue. The work is emblazoned with the words ‘Aboriginal art it’s a White Thing’ over a background of appropriated colour field painting and partially obscured by Jackson Pollock style paint splashes. The painting directly references the control of the marketing and presentation of Indigenous culture by non-Indigenous art professionals.

Another Queensland-based artist, Daniel Boyd (1982-), uses similar juxtaposition of text and colour in Treasure Island 2005. The painting appropriates the Australian Institute of Aboriginal and Torres Strait Islander Studies’ map of language groups in Australia with the words ‘Treasure Island’ in cursive script across the land. 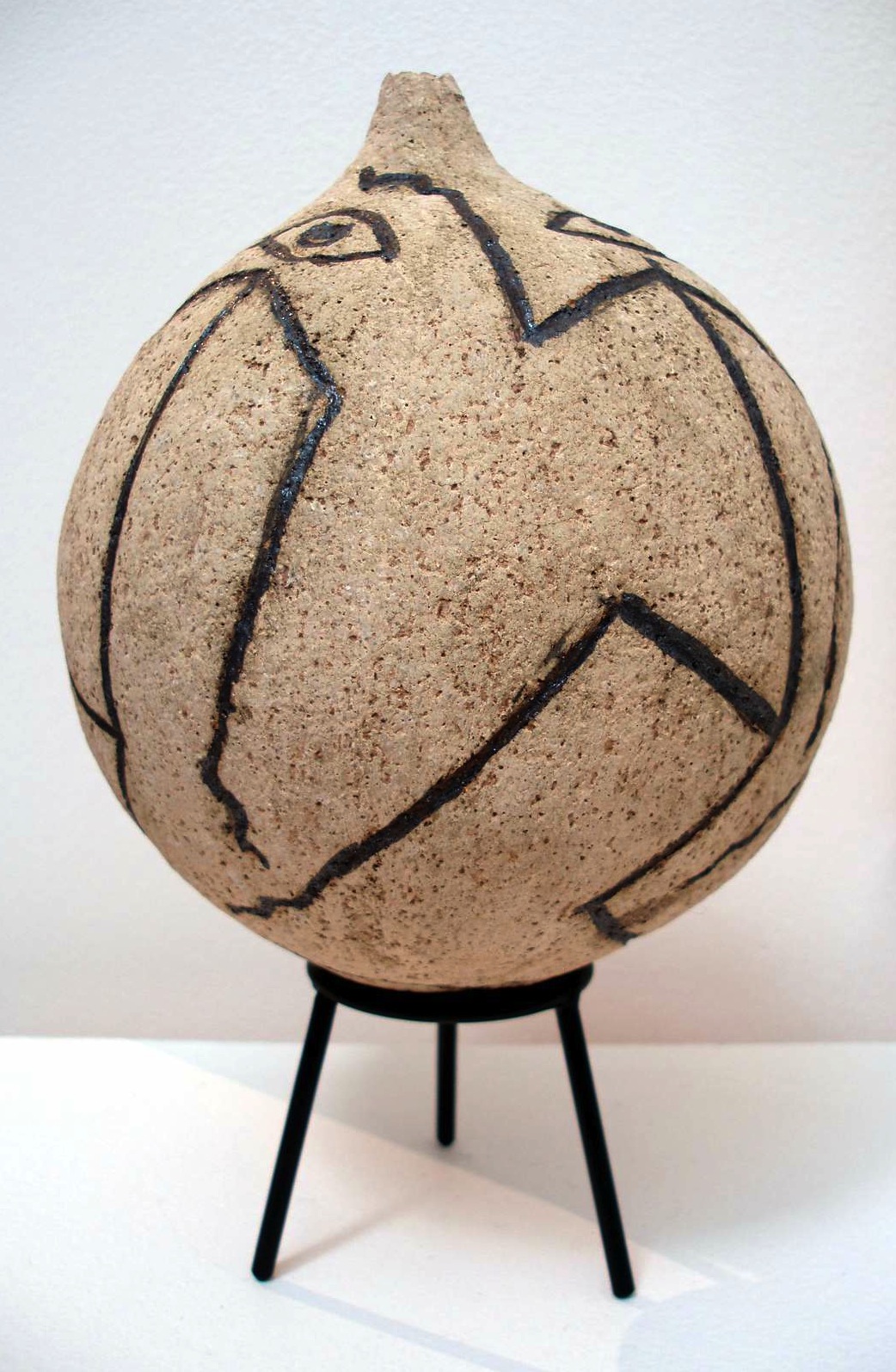 Boyd conflates the European scramble for unoccupied land (terra nullius) and the search for the fabled ‘Great Southern Land’ with the popular conception of buccaneers in Robert Louis Stevenson’s Treasure Island (first published in 1883). Boyd further explored the theme of piracy in his No Beard paintings produced in 2007. Boyd appropriated portraits of King George III and Governor Arthur Phillip, adding popular symbols of the pirate: parrot and eye patch. The expression ‘no beard’ refers to an account of Cook’s first landing in Australia, when, it is said, Aboriginal people thought he and his men were women, due to their lack of facial hair.

Thancoupie Gloria Fletcher James (1937-2011), also known as Thanakapi, is widely credited as the founder of the Indigenous ceramics movement in Australia. She trained under the famed Australian ceramicist, Peter Rushforth, and the Japanese potter Shiga Shigeo. The decoration on her pieces relate to traditional storytelling but her focus was always primarily on the ‘object as art’ in the Western tradition.

In Victoria, the contemporary painting movement was spearheaded by Lin Onus (1948-96) working in the 1980s and 1990s. Onus found inspiration in a range of artistic practices including Arnhem Land bark painting. The mixed media work, Fire 2, uses a combination of traditional and modern techniques: including synthetic polymer paint, bark and feathers. The work depicts a forest with trees marked by traditional rarrk painting, but has a viewpoint recognisable to Western art practice.

On several trips to northern Arnhem Land, Onus collected feathers, flowers, sand and bark that he incorporated into the painting. The subject itself is inspired by this trip also, where he observed bushland being burnt off to promote regeneration.

Fellow Victorian artist Vicki Couzens (1960-) is a Kirrae Wurrong woman from the Western District of Victoria whose practice focuses on the reinvigoration of traditional Indigenous art. Couzens felt an immediate and powerful connection upon viewing the Lake Condah possum skin cloak displayed at the Australian Print Workshop in Melbourne. Lake Condah is her Grandmother’s Country. Couzens was inspired to recreate a cloak using traditional methods, culminating in her first experience to replicate a cloak for the project ‘tooloyn koorrtakay-squaring skins for rugs’.

The Yaree Yareengu (to mourn) Yunggama cloak and its designs was created concerning the rituals and ceremonies of death. People were often buried with the possum skin cloaks, which explains why so few cloaks have survived into modern times. Couzens reclaims these original meanings with the inclusion of the outline of a figure, symbolically implicating the presence of a body. The three inlays of the interior of the cloak reference traditional possum skin bags (centre right), breasts and other symbols of women (bottom right) and marks of men’s ritual scarring used in ceremony and mourning (bottom left). 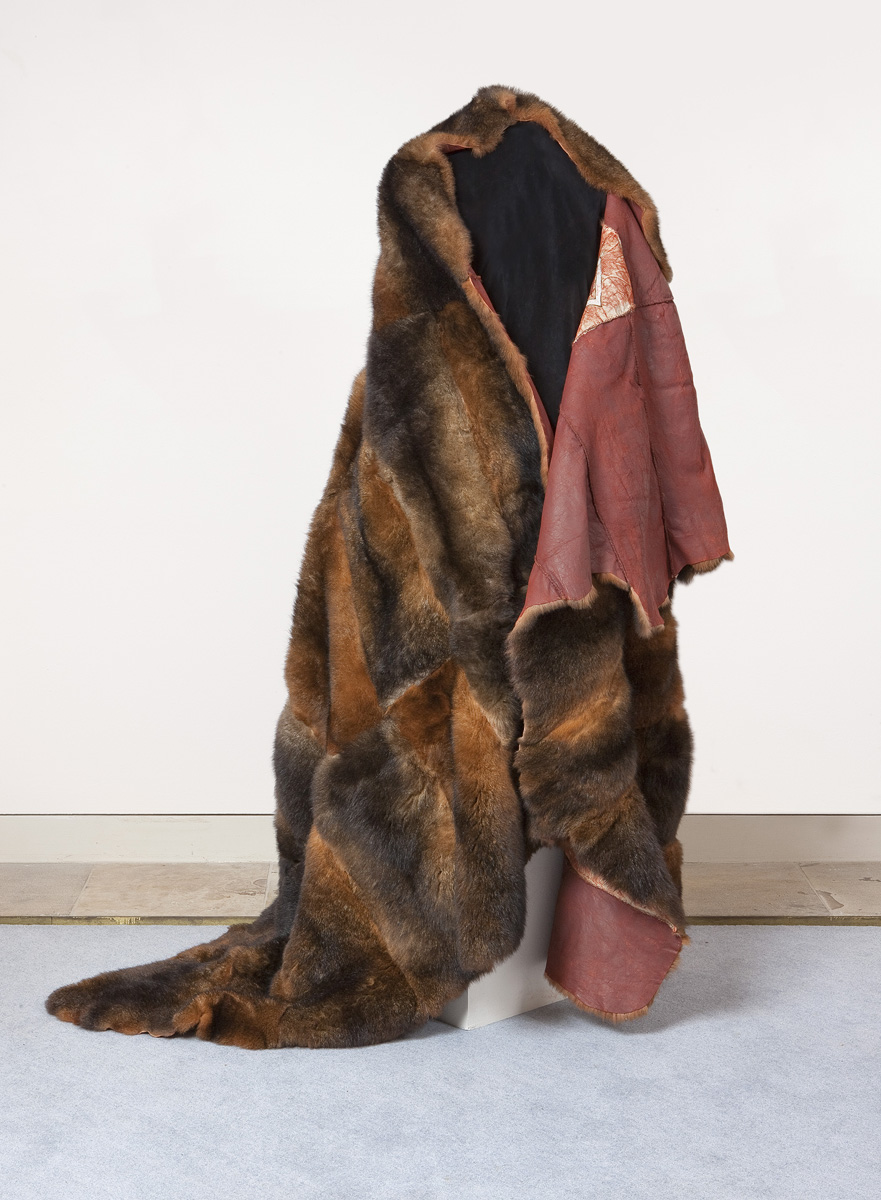 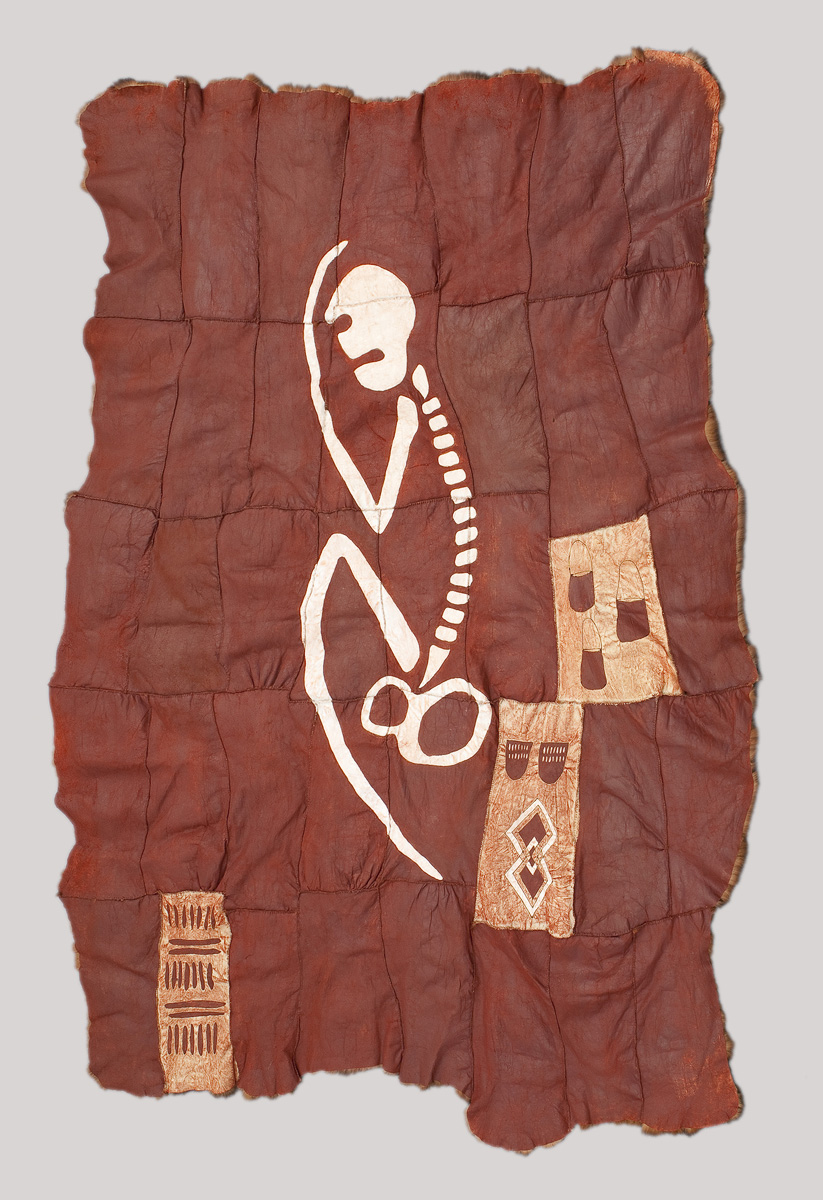 The creation of these possum skin cloaks represent the evolution in contemporary society of traditional cultural practices – and is concerned with exploring, relearning and invigorating of these practices.

Other Melbourne-based Indigenous artists, such as Christian Bumbarra Thompson (1978-) and Brook Andrew (1970-), use non-traditional mediums to explore and challenge conceptions of race and Australian history. Brook Andrew examines issues of indigenous male identity in his work Sexy and Dangerous, 1998. The work contrasts an anthropological photograph of an Aboriginal man with overlaid Mandarin script and the words ‘Sexy and Dangerous’. The work juxtaposes and explores nineteenth-century concepts of Aboriginality with contemporary stereotypes of Indigenous men.

Adelaide-based Trevor Nickolls (1949-2012), using a more traditional painting practice, explores the meeting of Aboriginal and Western culture. In particular, his Dream Time Landscape adopts the Western postmodern conventions of quotation, by appropriating Western Desert imagery in the uses of dots. Much of his work is concerned with the alienation and despair of individuals within the urban landscape. The subjects and titles of his painting are polarised between themes of the ‘Dreamtime’ and the ‘Machinetime’. This painting in particular expresses Nickolls’ concern for the degradation of the land and the environment under white occupation. 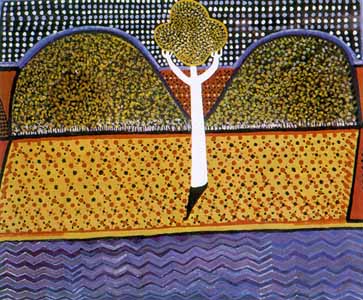 Working in a similarly colourful and pictorial style in South Australian artist Ian Abdulla. His art depicts the landscape and activities of his hometown Swan Reach. His paintings have a strong storytelling element, juxtaposing text and image against a flattened foreground.

Christopher Pease (1969-), an artist based in Perth, explores questions of Nyoongar identity, creating imagery challenging the accepted Western version of Australian history and culture. In Freeway, there is a convergence of the familiar loops and whorls of a busy urban road network and the iconography and colour palette often associated with indigenous ochre painting. The aerial perspective of the urban landscape further emphasises the connection to traditional depictions of land. 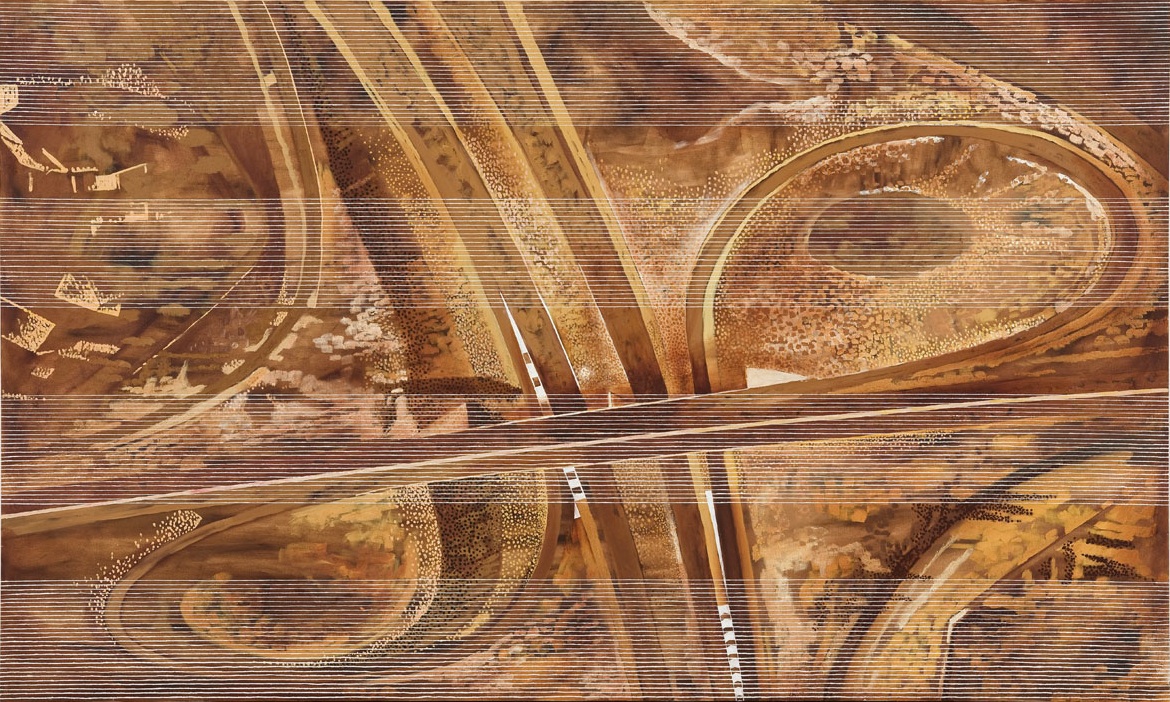 Pease uses the traditional medium of ochre in the creation of this modern scene, fusing past and present Indigenous culture and identity into the canvas. Pease collected the ochre from an ochre pit at Wilsons Inlet, Denmark, Western Australia: “This ochre pit has been used by my family for generations and was formed by both tidal and meterological influences that moved sediment within water… All things mineral and organic (including ourselves) are controlled by the movement of our planet. In this way we are insignificant.”1

Pease describes that his artistic training in secondary school focused largely on Impressionism, the Heidelberg School and modernism: “Any lessons related to Aboriginal art were generic with no relationship to land/country. I associated concentric circles with Jasper Johns rather than Indigenous iconography. The rise of Boomalli and the so-called urban Indigenous artists of the 1980s was the point where Indigenous people who were not living ‘traditionally’ found a voice through non-traditional art.”2

Gough, Julie, ‘Being There, Then and Now: Aspects of South-East Aboriginal Art’, in Ryan, Judith (ed), Land Marks, National Gallery of Victoria, 2006

McCulloch, Susan, Contemporary Aboriginal Art: a guide to the rebirth of an ancient culture, Allen & Unwin, 2001