Gunbalanya (Oenpelli) is located some 330 kilometres east of Darwin on the eastern border of Kakadu National Park. The area is bound by the East Alligator, the Gumaderr, and the Liverpool Rivers which all feed into the Van Diemen Gulf. The landscape is a network of grassland, swamps and billabongs which are dotted with pink and lilac water lilies. A sandstone plateau rises up to 200 metres above the plain. Monsoonal weather between December and April causes the plains to flood, and the area is accessible only by air. To the east and west of Gunbalanya extends the rocky Arnhem Land escarpment, which has been sculpted into dramatic caves and chasms over many centuries of wind and rain.

This area is rich in a variety of fish, bird-life and game (including emu, kangaroo, possum, flying fox, echidna, goanna), making it highly habitable for humans, and has been continuously occupied since the first Aboriginals came to northern Australia. 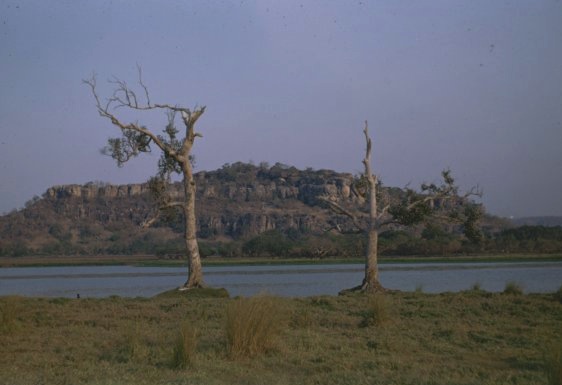 During the wet season the Aboriginal people retreated from the plains and took shelter in the caves of the Arnhem Land escarpment. Over thousands of years they have covered these caves with innumerable friezes of animals, hunting scenes, ancestor spirits and Dreamtime stories. The paintings were made using ochre, ash and clays. The paintings were both a form of communication and also part of religious ceremonies. They bear witness to thousands of years of unbroken Aboriginal culture and history. 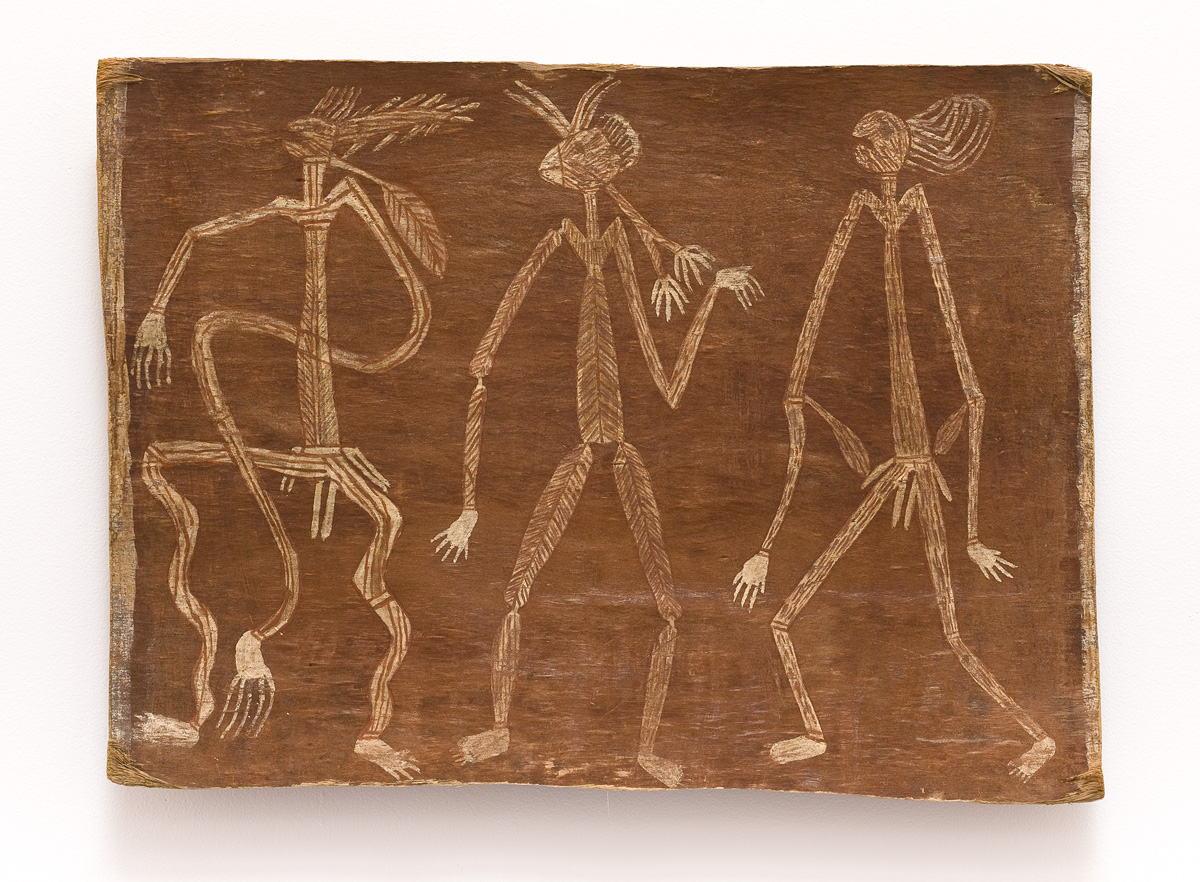 The Gunbalanya region is famous for its ‘x-ray’ style art, whereby figures of birds, game, reptiles and fish are depicted in cross section, showing the spinal chord and internal organs in intricately patterned detail. Many of these x-ray paintings provide instructions on how an animal is to be butchered after a hunt.

The other imagery commonly found in the Gunbalanya region is believed by the Aboriginal people to be the work of Mimih spirits. These pictures generally depict stick-like human figures in action poses, such as running, dancing or throwing spears, sometimes in large groups, such as a hunting party or corroboree. The figures are painted in red, which is believed to be a mixture of ochre and blood.

Gunbalanya is not a community of one clan, but is made up of a number of clans. Prior to 1900 the main Aboriginal groups living around the Gunbalanya escarpment were the Mengerr, Gagudju, Erre, Wuningak and the Amurdak. Each of these groups spoke their own language within their tribal lands and related to one another through the common Kunwinjku language. Currently there are around twenty-five clan groups including Maung, Ngumbur, Dangbon, Gundjehmi and Karik.

While Kunwinjku is the name of the language, Birriwinjku (meaning ‘fresh water people’) is how the people refer to themselves. Unbalange was a name given to the original inhabitants, but English speaking European settlers mispronounced the word, and it became, Oenpelli. Gunbalanya is the Kunwinjku name for the area. The traditional spelling Kunbarllanjnja is used as the legal trading name for the community council. The Manjoringunjg clan are the traditional owners of the land where Gunbalanya is sited.

Around 1900 buffalo shooters (the first Europeans to arrive in the area) came to the region, bringing tobacco, alcohol and sugar, which they traded with the indigenous inhabitants in exchange for access and buffalo hides. In 1906, one of the early buffalo shooters, Paddy Cahill (1863–1923) moved to the present site of Gunbalanya, where he established a farm for cattle, growing fruit, vegetables and cotton.

Cahill developed a deep interest and empathy with the Aboriginal people, studied their language and culture and sought to minimise their contact with other Europeans, especially missionaries.

In 1912 Cahill was appointed as protector and manager of a reserve based on Oenpelli. In 1915 the Northern Territory government turned Oenpelli into an experimental dairy farm with Cahill as manager.

At the end of World War I, industry disputes in Darwin brought an end to the dairy farm experiments, and the Federal Government handed management of Oenpelli over to the Church Missionary Society. The introduction of the self-determination policies of the 1970s saw the subsequent withdrawal of the missionaries and the eventual establishment of the Kunbarllanjnja Community Government Council, which is now part of the West Arnhem Shire Council.

In the early 1980s, Injalak Arts began in a small shed in Gunbalanya where some screen-printing was undertaken. By 1989 a new and larger building was constructed to house the art centre. The art centre is operated by an incorporated association and is run by local residents and artists.

The Centre acts as a place for artist to work, and as a gallery where their work can be sold. There are a large number of artists working with a diverse range of materials, including paintings on bark and paper, fibre products, limited edition prints, screen-printed fabrics, didjeridus and other artefacts.

Berndt, R.M., The Australian Aboriginal Heritage: An Introduction through the Arts. Ure Smith, 1974

Brody, Annemarie, Kunwinjku Bim – Western Arnhem Land Paintings from the collection of the Aboriginal Arts Board, National Gallery of Victoria, 1984

Isaacs, Jennifer, Oenpelli, Paintings On Bark, The Aboriginal Arts Board of Australia, 1976