Ampilatwatja (pronounced am-blood a-watch) is a community approximately 320 kms north east of Alice Springs. Around 1910, free hold title leases were granted by the Federal Government for the establishment of cattle stations on Alyawarr lands in an attempt to occupy the centre of Australia. Traditional Aboriginal owners were coerced from culturally significant sites and rights to hunting grounds, in order to make the land available for cattle stations.

From the 1960s until the mid 1970s, the strategically located Ammaroo Station became a gathering place for Alyawarr people. Many of the men employed by station owners, began to fence and drive cattle in this area assisting the development of the cattle and pastoral industry in central Australia. In 1976, under the Native Title Act, Alyawarr families were granted a small plot of land some ten kilometres from Ammaroo Station, known as Honeymoon Bore. People erected humpies of canvas, tin and trees and initiated what is now recognised as the Ampilatwatja community. 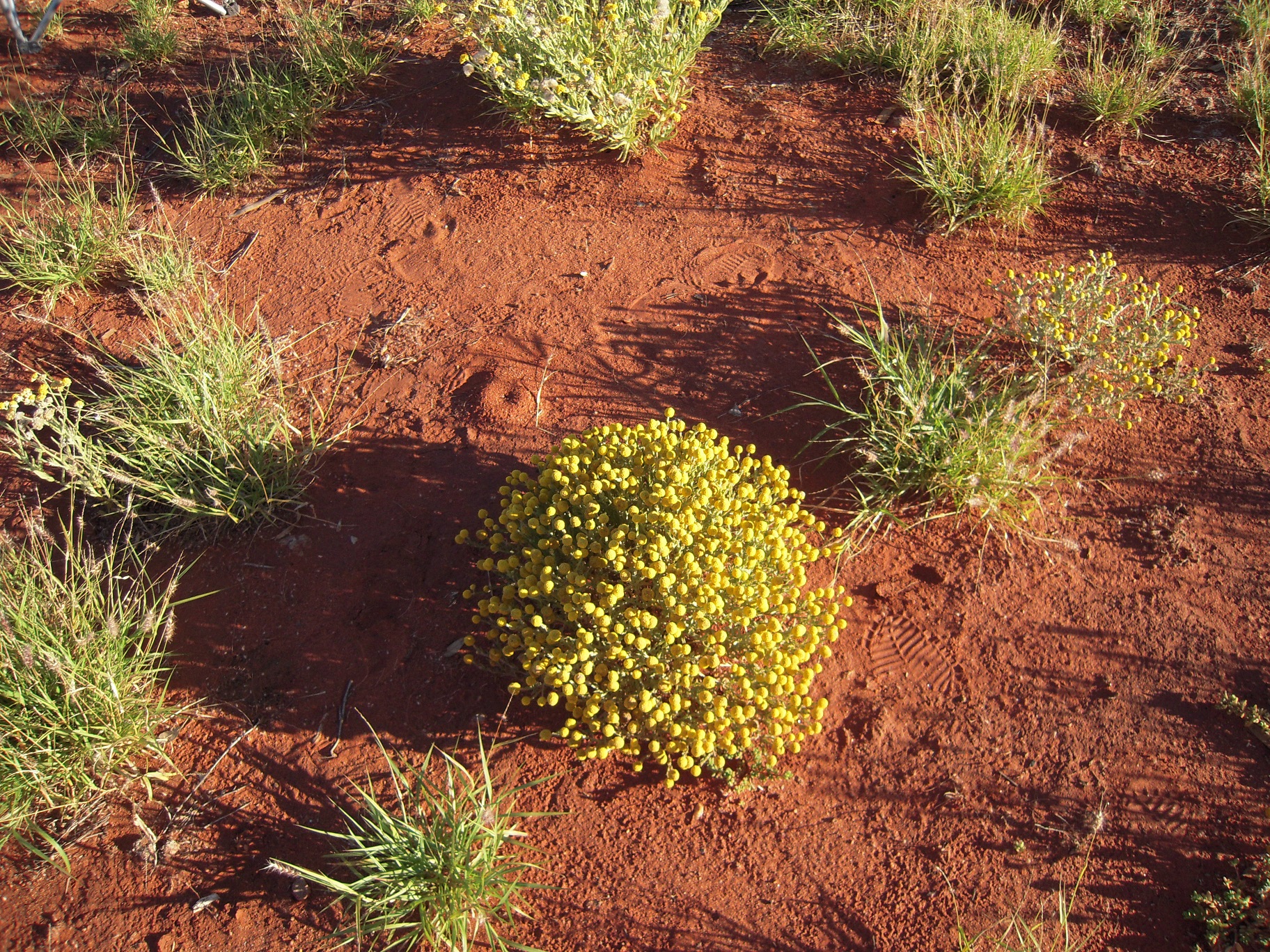 In June 1999, Desart, the Association of Central Australian Aboriginal Art and Craft Centres, responded to a call from the Aherrenge Council of Ampilatwatja, to visit the community in the hope of developing an art centre. The first artists’ workshop was held over the 5th and 6th July 1999. The paintings produced from the workshop, immediately revealed an excitingly new and fresh approach to depicting the countries and traditions of the Alyawarr people.

The paintings produced from the workshop, immediately revealed Ngwampen, a new and fresh approach to depicting the culture and traditions of Alyawarr country. During further workshops, the artists collaborated on canvas, which produced sufficient work for an exhibition held in Western Australia, which was to receive critical acclaim. By the end of 1999, the artists of Ampilatwatja had been acquired by major Australian private collectors and had exhibited at the recently opened Fox Studios in Sydney. In 2000 an exhibition was held at Lauraine Diggins Fine Art in Melbourne, where all works sold. Paintings by Ampilatwatja artists have since been exhibited in Paris, New York, London and Milan. 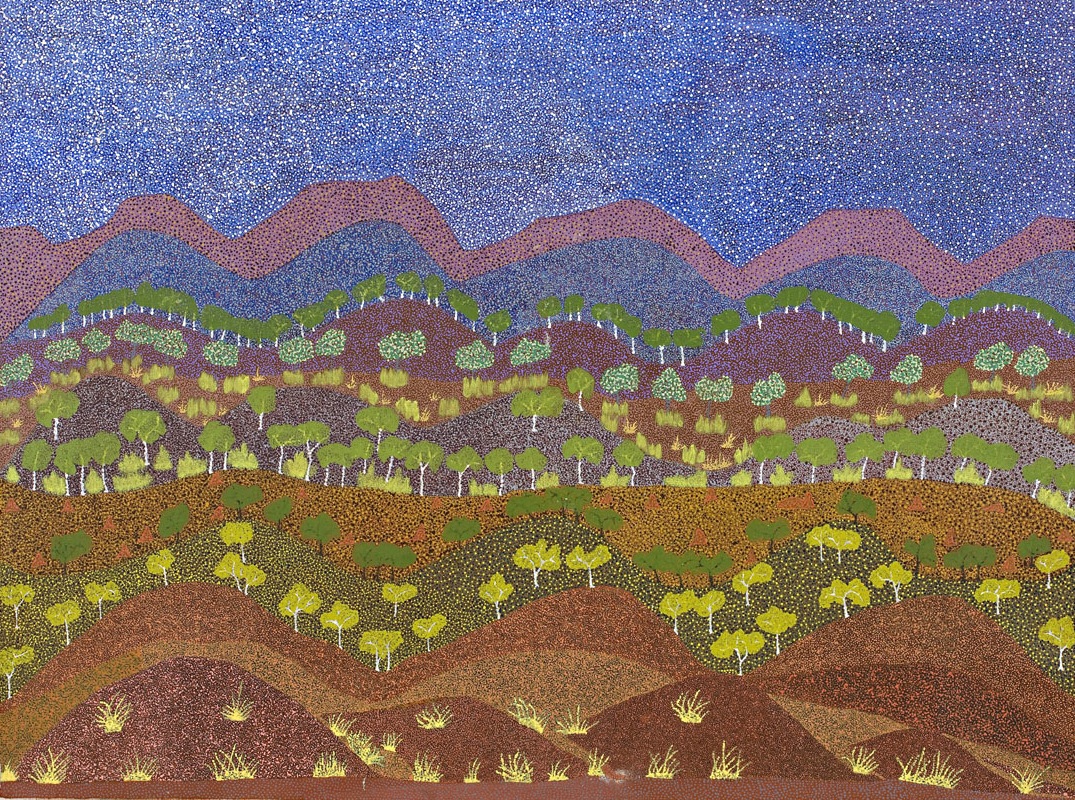 Artists of Ampilatwatja exude a complex and progressive approach to depicting the traditional knowledge of dreaming and country through the translation of waterholes and soakages, bush medicines and bush tuckers, mountains, sand hills and ant hills, in a style often referred to as pointillism.

The landscape format developed by these artists is detailed in thousands of dots of pure colour and has created a unique vision in the flourishing Aboriginal fine art market. The conventional western format of landscape painting is restricted by diminishing horizon lines and vanishing points of perspectives. The artists of Ampilatwatja are able to unfold the middle ground of their countries to reveal the locations of tiny soakages, where bush medicine plants can be found and bush tuckers grow. The reinterpretation of this format is a mature and progressive approach to painting. This process is not one which can simply be described as naïve; some artists of the community are the direct descendants of the late Albert Namatjira and the Hermannsburg School of watercolour and are well versed in the practices of western image construction. 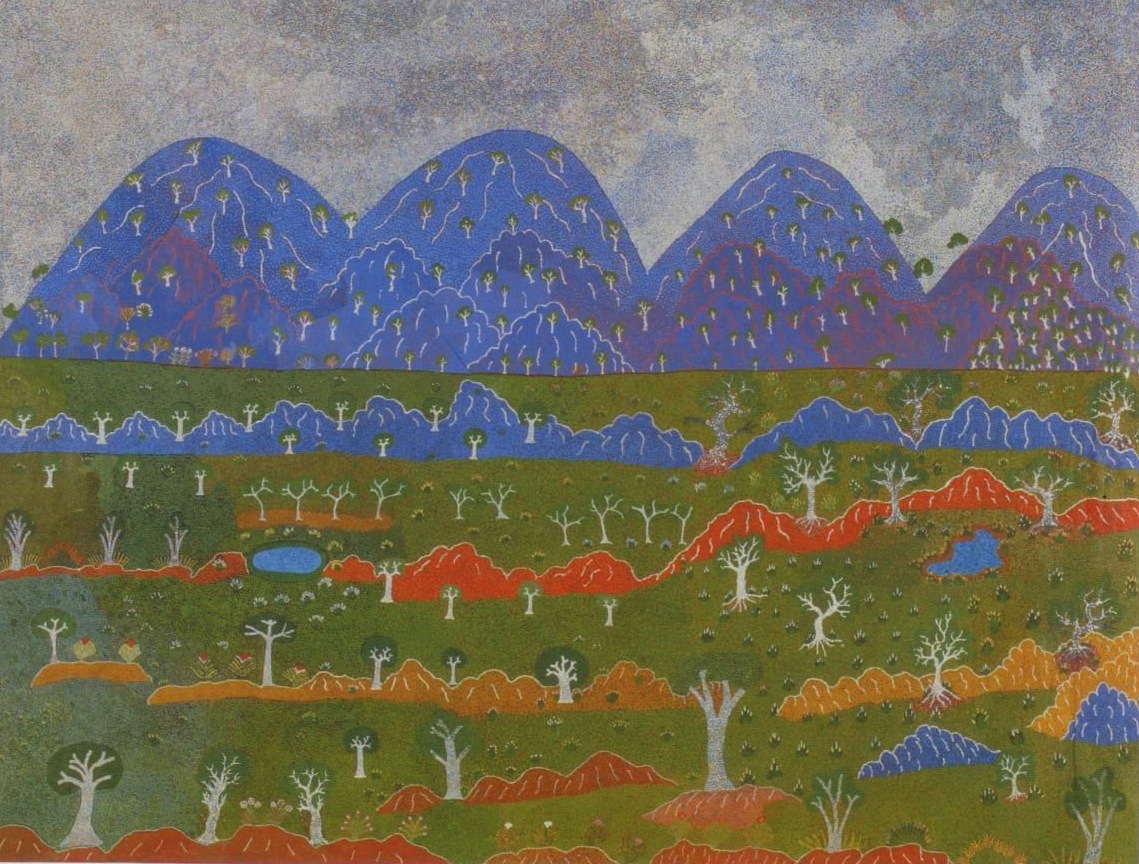 Their work retains the cultural heritage and values of Alyawarr lore. Places that hold great significance are depicted in their new artworks, identifying the country and the lay of the land instead of cultural symbols, roundels and dreaming lines. It is a process of identifying through the language of their painting, the places where they come from, the knowledge they have of their lands and the abundance of life which exists in the desert regions of central Australia. What may be labelled elsewhere as an empty, dry, arid desert, is for Ampilatwatja artists, a vibrant and life sustaining environment, filled with fruits, medicines, sources of water and culture which spans time immemorial.

Ampilatwatja painting is now established as an Aboriginal school or genre of painting and is stimulating social practices, increasing economic opportunities and reinforcing the values of local lore and cultures. Artists working in the art centre range in age from early twenties to late seventies, in effect spanning three generations within the community.