Haasts Bluff, or Ikuntji, in Central Australia, is 230 kilometres to the west of Alice Springs and fifty kilometres west of Hermannsburg. The community is nestled between two spectacular mountain ranges: Ulampawarru and the mountains Anyali (Mt Edward and Mt William) to the north and Mereenie Bluff to the south. The ranges are known for their dramatic change in colour from magenta to a deep ultramarine blue with the varying light of the day, resulting in spectacular momentary highlights of intense beauty.

Historically, Ikuntji was home to Indigenous people from a number of different language groups. However, today most people are either Luritja or Kukatja speakers, although there are family ties with both Western Arrernte and Pintupi. 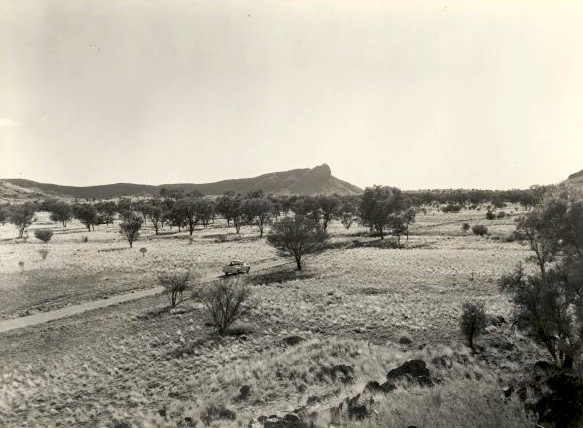 White interaction in the region increased in the early twentieth century, with Charlie Meyers and his wife taking the pastoral lease of the area in 1905. European involvement impacted on traditional Aboriginal society, with traditional food sources and waterholes affected by grazing livestock. The Aboriginal people and pastoralists clashed during this period, reaching a head in 1928 with a massacre of over one hundred Warlpiri people at Coniston Station. The Aboriginal population was eventually forced in government stations and Lutheran missions. Ikuntji – taking its name from the Luritja word from ‘where creeks cross’ – was established as a Lutheran settlement in 1935.1

In 1941, Haasts Bluff was established as an Aboriginal Reserve by the Native Welfare Branch. Following water shortages in the area, the Papunya settlement was established in 1954, with the majority of the population relocating to Papunya. Development in the Ikuntji community began in 1956 and by March 1957 people began to move back to the area. In October 1960 the community of Ikuntji was officially opened. The community moved towards self-management in 1979 when the Department of Aboriginal Affairs transferred control of the community back to the people.2

From the 1970s, many of the men based at Papunya produced artworks that were collected by the field officers for the Papunya Tula Company. In the mid 1980s, this practice ceased when the men either moved further west or passed away. 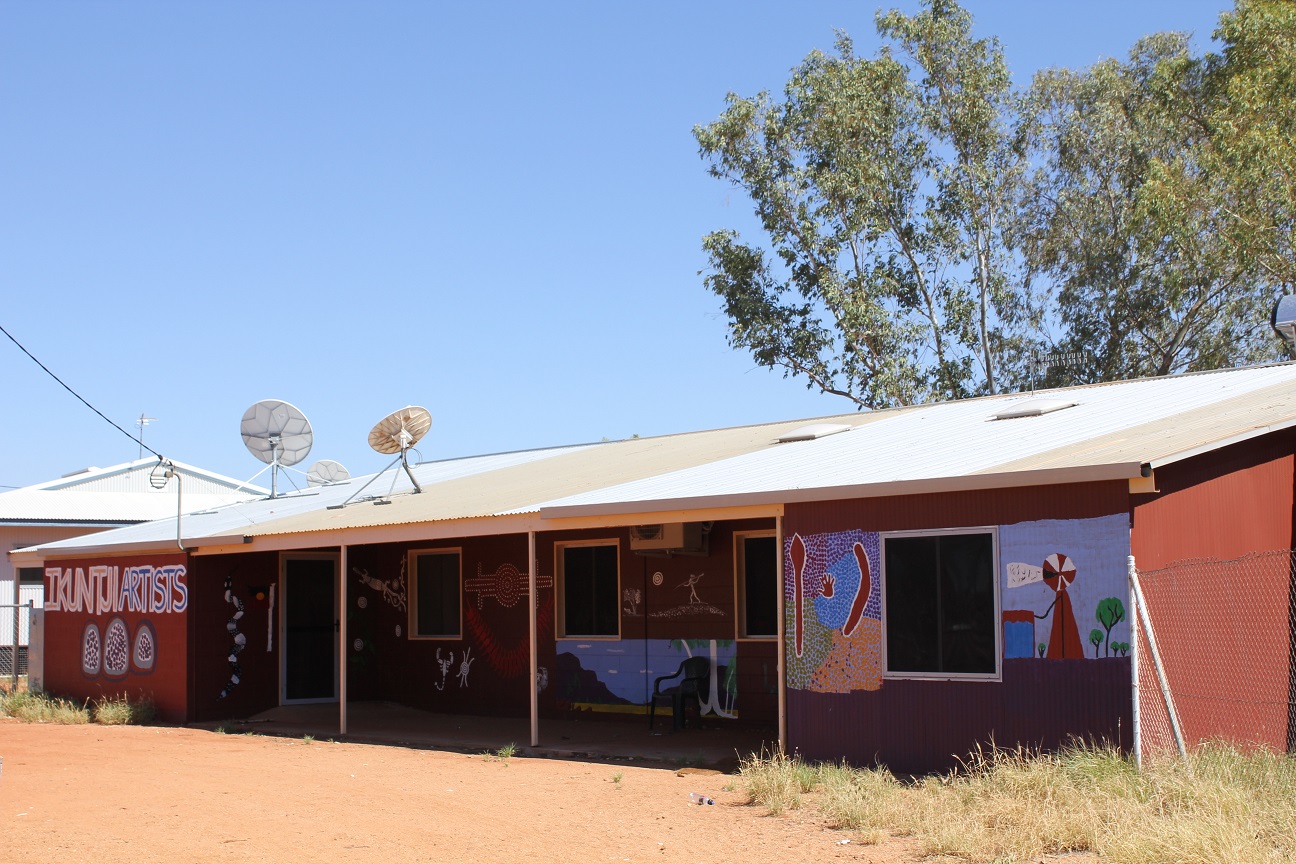 In 1992, Marina Strocchi visited Haasts Bluff and due to the positive reaction from the local people, was employed to set up a painting studio in the Women’s Centre.3 The Ikuntji Women’s Centre was established and the community-owned centre now works with over thirty artists.

The distinctive landscape of Haasts Bluff features in the stories of the Luritja people. During the drought period in the 1930s, the Luritja people moved from various caves and rock holes throughout the mountain ranges. Stories of these trials and tribulations are represented in many of the paintings created by the senior law women.4 The artists also represent the life cycle of various bush tuckers, and the journeys the women have made over generations, to hunt and collect these native foods.5 The intensity and vibrancy of the desert colours – vivid reds, pinks, purples, yellows and greens and the subtle motifs of the vegetation – are expressed by the artists through their use of colour and bold and expressive imagery. 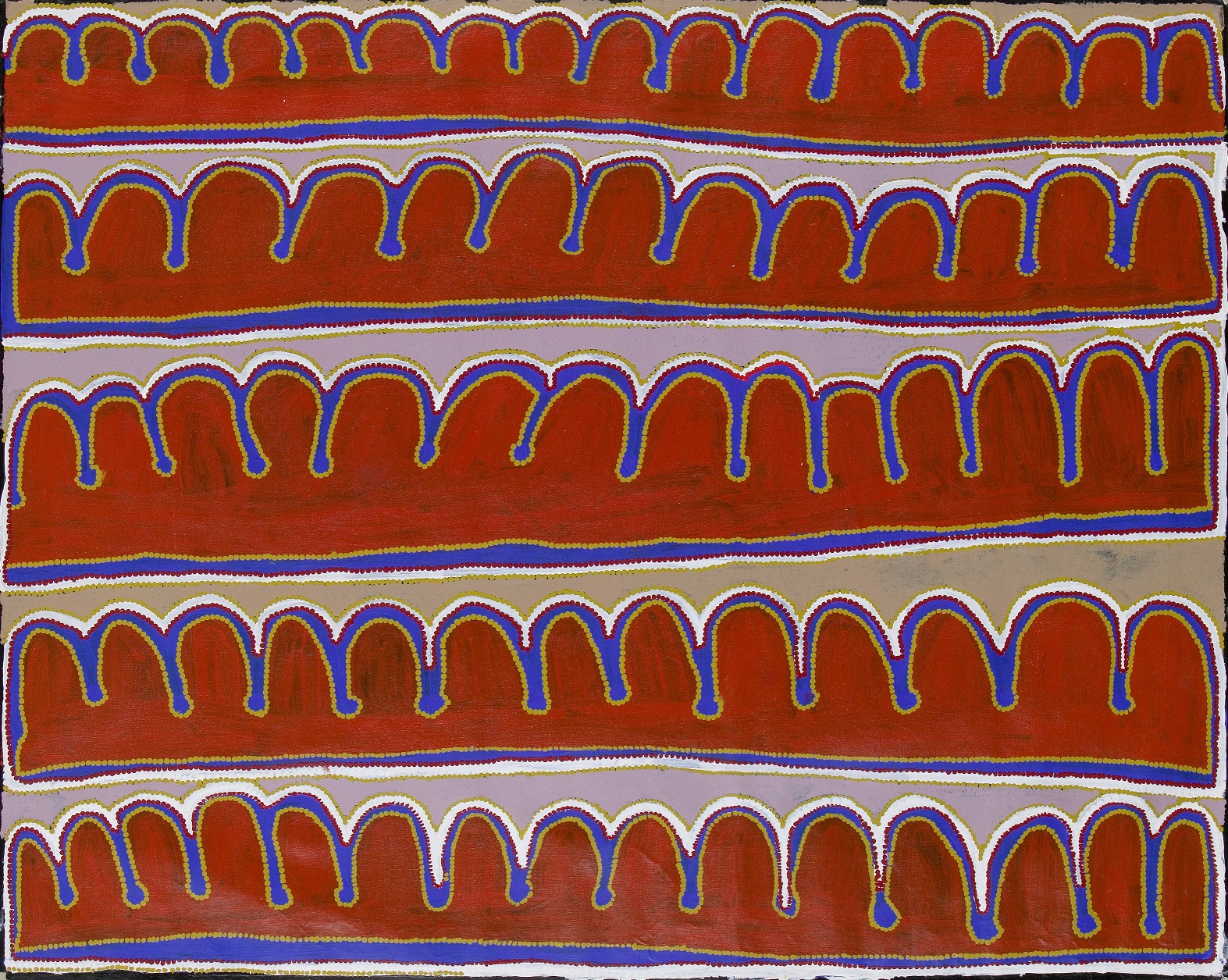 Mitjili Napurrula, is one of the most recognised artists from this region. She took imagery in a new direction with her soulful interpretation of trees, drawing on her father’s dreaming Uwalki, the story of the spear straightening ceremony which was taught to Mitjili by her mother. The particular patterning of the tree motif create their own magic as the layering of the tree motif seem to hang on the canvas like mobiles. One of the notable features of her work is the distinctive Pintubi minimalism. Mitjili was married to fellow artist Long Tom Tjapanangka.

We gratefully acknowledge the use of research of Ikuntji Artists in the preparation of this text.