Knee Deep in the Willows depicts a Friesian cow stranded in the mud and includes a frustrated farmer, hands on hips, on the other side of the river, contemplating the next move. The scene is inspired by the artist’s wanderings amongst the willows near his home in northern Tasmania, either fishing or with his dogs, where he is often confronted with a Friesian cow strayed from nearby grazing paddocks. Humans are rare in McWilliams’ painting. However, recent works introduce a human dialogue into his usual animal inhabited world.
A further treasure in this painting is a Thylacine or Tasmanian Tiger hidden in the shadows, a subtle conservationist statement from the artist who is passionate about their ongoing existence despite human intervention in their environment.

McWilliams’ craft has evolved from smaller scale works, particularly painted wooden panels or painting on furniture, to larger scale canvases where the landscape is the focus. Much of McWilliams’ knowledge of antiques was acquired during his teenage years when he travelled with his father on buying trips around Tasmania for their antique shop in Longford. McWilliams explains “I started painting on furniture simply because I liked the old timber, and it was at hand. I enjoy painting things that are close to me: water, trees and mountains, and familiar local animals.”

In many of his works, it’s a fleeting moment in nature that he captures and preserves. The viewer curious to see what is inside is presented with a delightful surprise. The element of hidden surprise adds an extra dimension to McWilliams’ painting. Look carefully at the artworks as those who undertake the treasure hunt will be rewarded with a glimpse of a thylacine, a favoured motif of the artist. Like many, he is incredulous that human intervention could cause the extinction of this species and hopes that perhaps there are still a few Tasmanian Tigers out there, hiding in the shadows as they are in his paintings. McWilliams has been interested in the Thylacine since he was a child, McWilliams explains “I’ve drawn it since I was small, and have always tried to imagine what it would be like to see one and to consider different relationships we could have, like having one for a pet. I try to imagine them into my life.”

James Gleeson was born in Sydney in 1915 and brought up by his Aunt and Mother. He was three when his father died. Gleeson trained at East Sydney Technical College and then spent time teaching both at primary level and lecturing at Sydney Teachers College. From 1949 to 1972 he was art critic for the Sun and from 1962 for the Sun Herald. Throughout his life Gleeson travelled moderately, visiting Europe, the States, South America, South Pacific and Japan. He spent most of his life in Sydney.

Influenced particularly by artists such as Salvador Dali, Hieronymous Bosch and van Gogh, Gleeson succeeded in becoming Australia’s first and foremost surrealist artist. He invites the unconscious to appear seeking fuller self knowledge. Like many of the Surrealists, Gleeson kept paper and pen beside his bed to record his dreams and used various painting techniques including frottage, decalcomania and impasto.

By 1980s the artist had pushed the extreme of the figure so far that to him it had almost become unrecognizable, hence his work became more abstract as he no longer felt the need to use form at all. This resulted in his later works being mainly oil on large canvasses and is particularly pleasing, showing how Gleeson’s struggle within eventually matured to a more calm, balanced depiction.

___
James Gleeson’s artworks have been included in the following public and private collections: Lapsed Shadows Recycled to a Capable Coast of 1988 in the Art Gallery of New South Wales; The Opening Gate of 1989 in the Colin and Liz Laverty Collection; The Dance of 1989 in the James Fairfax Collection; The Darkening Stage of 1991 in the National Gallery of Victoria and The Secret Heart of the Headland of 1991 in the National Gallery of Australia.

It is intended at an appropriate time to donate this work to the
National Gallery of Victoria, in memory of our gallery founder
Lauraine Diggins OAM who passed away on Good Friday,
the 19th of April 2019.

This dramatic depiction of Christ Carrying the Cross displays Ligozzi’s remarkable naturalism and highly accomplished rendering of detail. His controlled hand is evident in the haunting visage of Christ and the beautifully observed armour and weapons of the guard. The pommel of his sword exemplifies the often drawn comparisons between Ligozzi’s fastidious draughtsmanship and that of northern painters in Italy such as Hans Rottenhammer.

Jacopo Ligozzi moved to Florence from Verona in 1577, when he was appointed as court painter to Francesco I De’Medici the Grand Duke of Tuscany. He worked extensively for the Medici family until his death in 1627.  This hauntingly beautiful work was painted by Ligozzi early in the 17th century, and was acquired by private treaty from Christie’s London in 2016.

“As the successor of Giorgio Vasari (1511 – 1574) to head the Accademia del Disegno, Ligozzi also became an important source for the influence of Venetian art in Florence. With this Venetian influence of Color, it enhanced Ligozzi’s Mannerist painting style and sculpture-like figures, as influence by Michelangelo. Born in Verona to a family of artists and craftsmen, Ligozzi became a successful painter, illustrator, designer and miniaturist, active mostly in Florence. His father, Giovanni Ermanno Ligozzi (1572 – 1605), was also a painter, as was his brother Francesco and his cousin Francesco di Mercurio.

Before settling in Florence in 1576, he was an artist for the Hapsburg Court of the Austrian Empire in the city of Vienna. From this illustrious position, he found another in Florence with several patrons from the Medici family. Additional to his religious and mythological depictions, he also painted and drew several works of fauna and flora. These works were not just artistic decorations, but highly detailed depictions used for the scientific records of Medici patrons and the Italian naturalist, Ulisse Aldrovandi (1522 – 1605).

Ligozzi’s first important public commissions came in the 1590’s, notably two monumental historical scenes, painted on slate, for the Salone dei Cinquecento of the Palazzo Vecchio, completed in 1592. He painted altarpieces for such local churches as Santa Maria Novella, San Marco and San Giovannino degli Scolopi. He also painted altarpieces for churches elsewhere in Tuscany; in Bibbiena, Poppi, Arezzo and at Monte Oliveto Maggiore, and returned briefly to his native Verona around 1591. Ligozzi’s best-known works as a painter are, however, a series of seventeen lunette frescoes of scenes from the life of Saint Francis for the church of Ognissanti in Florence, completed in 1600. The artist became increasingly devout as he grew older, and among his late altarpieces is a Martyrdom of Saint Lawrence for the Florentine church of Santa Croce, painted in 1611. His last Medici commission was for a series of four paintings of the Passion of Christ, painted between 1621 and 1622 for Maria Maddalena of Austria, mother of the young Grand Duke Ferdinando II and co-regent during his minority.

A number of his religious paintings remain in situ in churches.

Ligozzi’s importance and versatility were recently the focus of an exhibition at the Pitti Palace in 2014:  Jacopo Ligozzi Pittore Universalissimo, Sala Bianca, Palazzo Pitti, Florence 27 May – 28 September 2014.

What a contrast to welcome summer for 2019 – snow in Victoria and Tasmania but bushfires in New South Wales and Queensland! So here are a few artworks to bathe in the warm glow of sunshine; feel calmed by the lapping of water or rest under shady trees and enjoy the long days of summer, at least in our minds…

Blackman captures the sunburnt outline of a beach bather, contrasted against the golden sand depicted in squares of burnished metal leaf. The simplicity of the figure’s graceful lines highlight Blackman’s skill as a draughtsman.

Boyd lived with his family at The Grange, Harkaway where the Berwick landscape was populated by hills and fields and pastoral farms as well as more wild areas of thick undergrowth and fallen gums.

In 1920-21 Bunny completed a series of richly coloured monotypes (painted on glass so only one unique impression is taken). Many of the works drew their subjects from mythology or orientalist interest, often featuring nudes completed in a decorative manner utilising complex and harmonious colour and pattern.

Andrew Sayers painted the landscape around the south coast of New South Wales over a number of years, including the picturesque wooden bridges. All painted en plein air, the works range from sunny depictions with lush vegetation and golden sands, to windy waves washing under the bridge, to minimalist imagery of the bridge pared back so the white posts seem to float in the air.

We extend our congratulations to William Eicholtz whose graceful and joyous large-scale sculpture At the Altar of Terpsichore has been selected for this year’s Sculpture by the Sea, with 100 sculptures along the spectacular coastline between Bondi and Tamarama Beach, NSW.

Eicholtz’s decorative Harvest Doormen welcome you to Lauraine Diggins Fine Art, as guardians either side of our front door.

Sculpture in an outdoors setting, especially on a large-scale is certainly eye-catching and a number of sculptural works are situated in our Gallery gardens including Peter Schipperheyn’s sensuous marble, My Wife.

Sculpture of a more domestic scale provides wonderful opportunities to display works in your home, such as the juxtaposition of assembled shapes, colours and materials in the work of Gus Dall’Ava, in the playful and intimate conversation of Twenty-Fifth Dialogue. 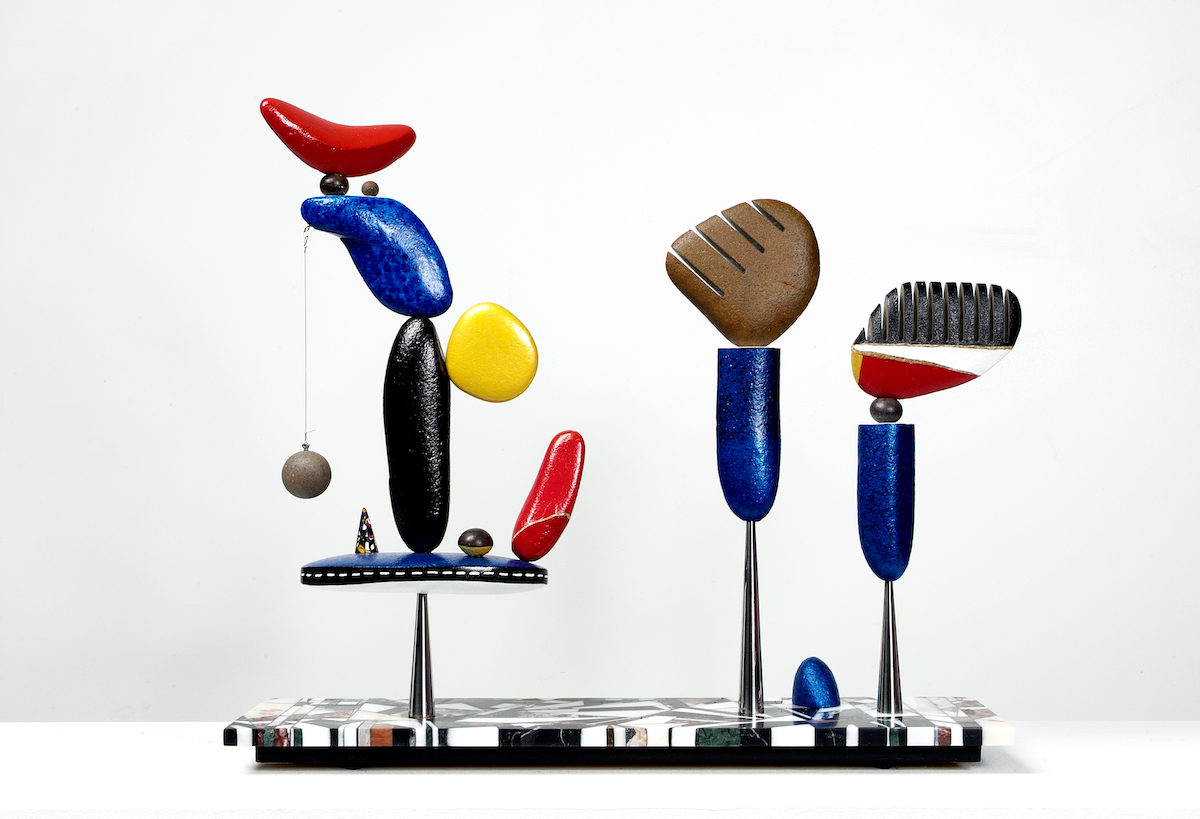 We were delighted that Andrew’s friend and colleague Doug Hall was able to open the exhibition Andrew Sayers: Defining the Artist, featuring a series of over 40 gouaches of both intimate and sweeping views of the coast, the desert, gardens, bridges, rocks, seas and skies. Doug Hall AM, former Director at the Queensland Art Gallery and Gallery of Modern Art and former Australian Commissioner of the Venice Biennale, spoke engagingly of the impulses which define an artist and the tradition of artists as curators and directors in our public institutions. His eloquent words about Andrew’s gouaches gave us all a greater appreciation of his ability as an artist to portray the Australian landscape with a real honesty, with “poise, quiet monumentalism and clarity.”

Watch the video below or click here for further details about the exhibition which is showing now until 27 April 2019.

We pay tribute to Mirka Mora who recently passed away, aged 90, and was remembered and celebrated on Tuesday at a State Memorial at the Palais Theatre. Remembered and celebrated for her joie de vivre and for the indelible impression she has made on Melbourne city, through her personality; her art and the sophistication brought to the city through her restaurants. Her artistic practice covered so many differing media but was always characterised by a readily identifiable style, her use of bright colours and patterns and dreamy figures. Mirka’s art is part of Melbourne’s psyche with her mural at Flinders Street; her mosaic at St Kilda and the much-loved murals in a number of Melbourne restaurants.

Mirka’s art and spirit touched many. Enjoying a long lasting relationship with Heide Museum of Modern Art, Mirka involved herself in the life of the museum and its various programs.

Mirka’s passion for life and art has left a lasting impression amongst those at Lauraine Diggins Fine Art, learning from and dealing with her as an educator and artist. We are deeply saddened by the loss of a passionate, colourful and generous soul, who gave so much, Melbourne is all the more richer. 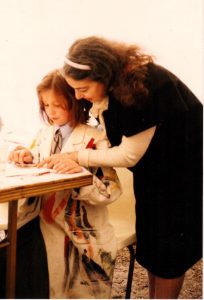 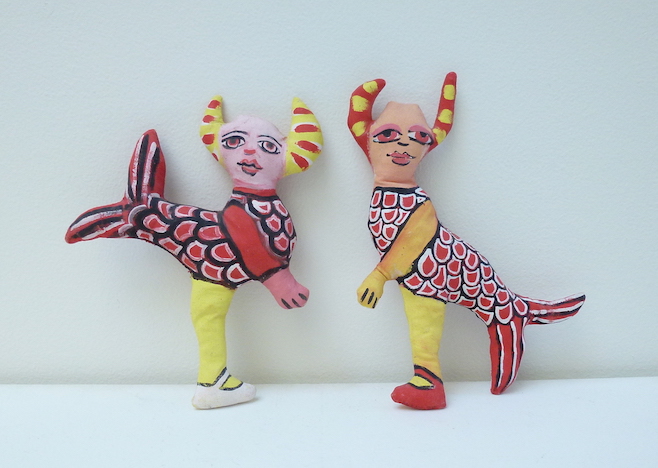 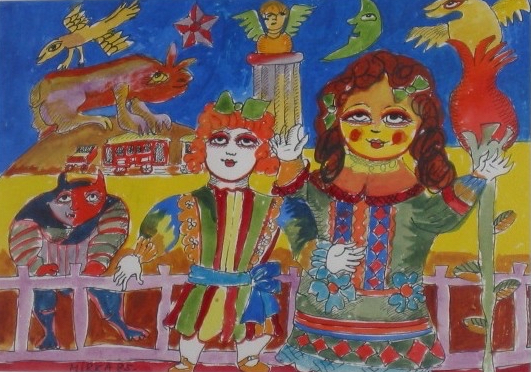 It was a pleasure to receive a visit by Bin ZOU and Xiaohong ZHANG, Cultural Consul’s of the Consulate-General of The People’s Republic of China in Melbourne and Marty MEI, Press Secretary to the Premier of Victoria, Hon Daniel Andrews.

Our guests enjoyed the diversity and unique artistic style of Xiaoping ZHOU’S exhibition, The Cross Cultural Influences of Chinese and Indigenous Art 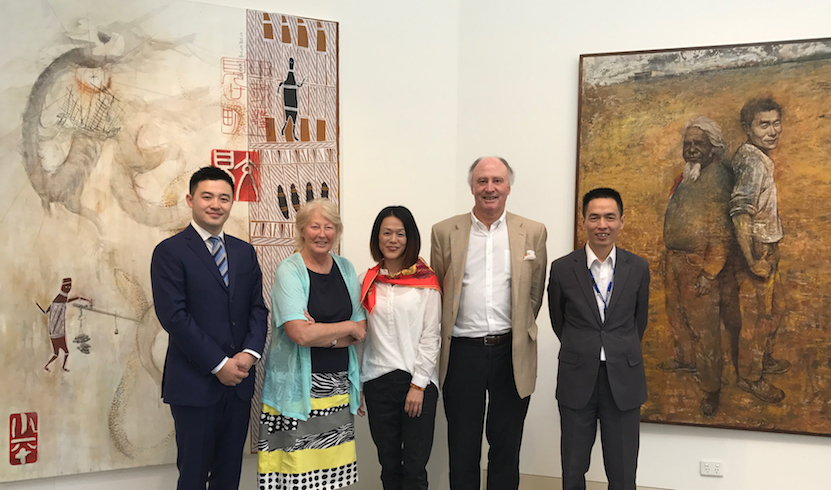 Painting on right hand side:
ZHOU XIAOPING 1960 –
Back to Back, Portrait of Jimmy and Xiaoping 1998
synthetic polymer on rice paper laid down on canvas
207 x 154 cm