This is the final week to view our current exhibition John Dent: Between Two Countries and we invite you to take A Closer Look At… John Dent’s larger paintings in the exhibition.

The subject matter of the larger paintings crosses a broad range: landscapes; interiors; figures; still lifes – all themes with a long tradition in the history of art. Dent takes inspiration from his own experiences, from the mundane of a Hills Hoist in the backyard of an inner city Melbourne suburb; to the more exotic, a studio in Mallorca; to the macabre, the soft colour palette of the seminal triptych, Natura Morta- Marta belies the rather uncompromising subject. Dent is able to raise elements from their everyday existence to the distinction of art, particularly highlighted in these paintings where familiar objects are lifted through their presentation on a grand scale. However the real subject matter is often the very act of painting itself, the placement of elements, of form and colour on the canvas.

Exhibition showing until Friday 25 June. Visit our website to view images, watch a video of the opening, download the catalogue and read the Closer Look At… essay.

In our next A Closer Look At… we examine the paintings of Paris by John Dent which are redolent with atmosphere, indicative of his ability to absorb the sense of place he discovered there. Mostly, these are quiet introspective moments, a captured snapshot in time. The street scenes take the viewer on a promenade with the artist around Paris, as he explores the city. If the imagery is sometimes romantic, it is because this reflects the everyday reality of the city and these are scenes actually encountered – an arched bridge over the river; a flag hanging from a terraced building; lovers entwined in a park. Equally, Paris is a city of unexpected surprises and strange contrasts, casual witness to nuns in full habit kicking a soccer ball. At other times the subject is almost mundane, a woman with a striped apron in her window; or tinged with humour, the upright nanny on duty with her sensible umbrella shading her from the sun contrasted with the lounging figure enjoying a drink on the deckchair. 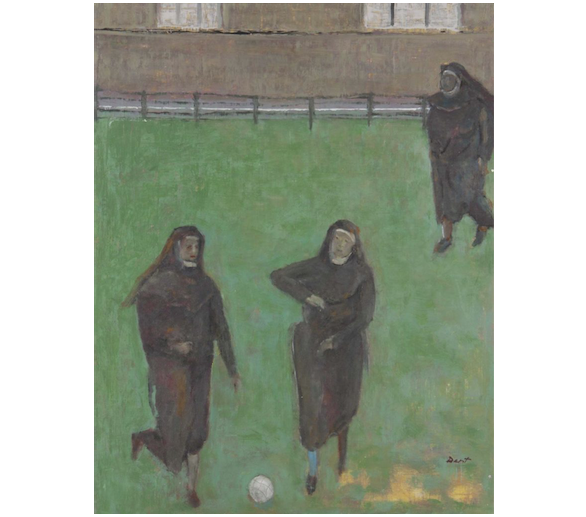 The significance of Paris and its art scene has been a major influence for many artists throughout history and has certainly shaped Dent’s oeuvre, evident in many aspects but essentially in the very real French atmosphere captured in these paintings. To take A Closer Look At… John Dent in Paris click here 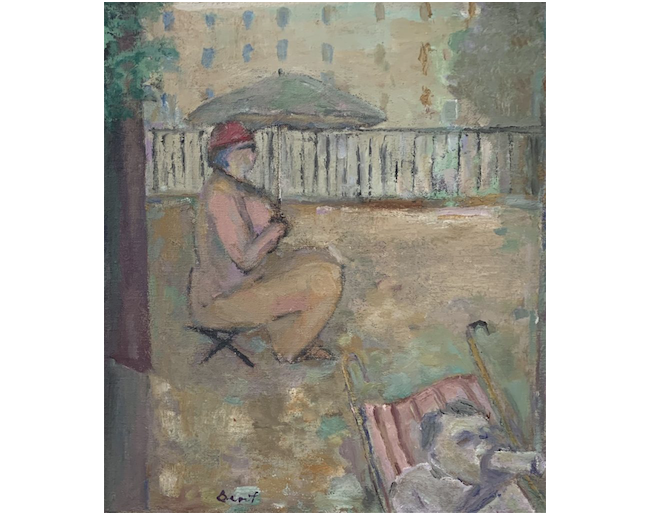 To view images in the exhibition; watch the video of the opening and read our Closer Look At… essays please visit our website.

In our series of A Closer Look At… essays, we examine an aspect of current exhibited artworks. In the first of these for John Dent: Between Two Countries, we further consider the intriguing still life paintings where a range of commonplace objects are carefully placed in juxtaposition to each other and the space between them, to hint at a narrative beyond the ordinary.

These are elegant paintings, where every object has been deliberately considered and heightened by the use of texture and skilful use of colour, which is both rich yet subtle. In his opening remarks, LDFA Director Michael Blanche referred to Dent’s still paintings as “semi-abstracted displaced objects”, seeing links to artists including Giorgio Morandi; Lucio Fontana; Pierre Bonnard; Edouard Vuillard and to one of John’s key mentors, George Baldessin.

Take A Closer Look At… John Dent Still Life Paintings here, particularly, whilst the Gallery is closed due to current Victorian Covid restrictions. Images can also be viewed online and please contact us via email with any queries ausart@diggins.com.au. The exhibition has been extended to 25th June and we hope to welcome you soon (at this stage from 11 June).

John Dent: Between Two Countries featuring 50 paintings from the earlier years of his ongoing career, painted in both Australia and France. A rare opportunity to view the collection together on a scale not seen since Dent’s retrospective at Castlemaine Art Gallery in 1994. Subjects range from intriguing and elegant still lifes; atmospheric interiors and figurative works; and streetscapes of Paris, with its everyday realities and unexpected surprises. A range of subjects and scales but unmistakably Dent’s lyrical and complex compositions and multifaceted muted colour palette.

The exhibition is showing until 11 June and a colour illustrated catalogue can be downloaded from our website.