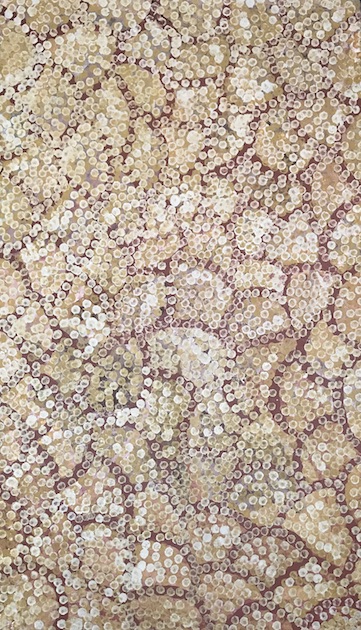 In the late 1970s, Emily took up batik, along with other artists from Utopia, as a means of expressing cultural stories and designs and began painting on canvas in 1988-89. Her earlier work developed a distinctive skeletal linear formation overlaid with dots to form highly abstracted works.

Women’s Dreaming (1993) features these meandering lines to depict the bush potato dreaming (yam or Anatye) with the arcs representative of awelye, ceremonial body design, painted onto women’s breasts and chest.

The legacy of Emily’s prolific and highly successful artistic career has been significant both among Aboriginal artists and the wider community. She is widely regarded as one of the most notable Australian artists of recent times. Her paintings are held in all major museums and galleries in Australia and in significant contemporary collections internationally.

Read more about this painting