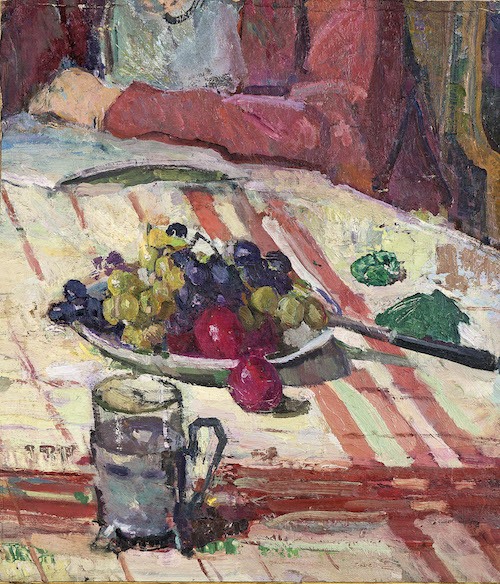 
The growing global interest in women artists is reflected in the increasing number of exhibitions highlighting their work. A number of artworks from our current exhibition of Innovative Australian Women are currently on loan to other exhibitions:

Joy Hester Remember Me at Heide Museum of Modern Art is showing until 4 October 2020 (check their website for updated viewing times). Further details and video tour of the exhibition with Curator Kendrah Morgan can be viewed here.

Bessie Davidson & Sally Smart – Two artists and the Parisian avant-garde at Bendigo Art Gallery which is showing until 26 July 2020. Australian artist Bessie Davidson forged a successful artistic career in France and is the great great aunt of contemporary visual artist Sally Smart who was profoundly influenced by Davidson, and who has created a new work in response to and to comment upon Davidson’s work and life.

Lauraine Diggins Fine Art is pleased to have assisted Bendigo Art Gallery with client loans of five Davidson artworks for this important and revealing exhibition, three of which are subsequently included in our current exhibition Innovative Australian Women. Bendigo Art Gallery has provided a walkthrough video of their exhibition which can be viewed here. The exhibition is also accompanied by an extensive catalogue which can be viewed here.

Bessie Davidson is a name being heard more now in Australia, the country of her birth, although her reputation in her adopted home of France has always been greater. In fact, Davidson was appointed Chevalier de la Légion d’Honneur for Art and Humanity by the French Government in 1931, the highest accolade the French government can bestow.

The exhibition at Bendigo brings together over 50 of Davidson’s still lifes, interiors, portraits and landscapes, characterised by a sense of intimacy and a beautiful use of light and tone, an increasingly daring use of colour and vigorous brushstrokes.

“A courageous and pioneering artist, Bessie Davidson left the comfort of her home and family in Adelaide to pursue an artistic career in Paris, making a name for herself as a painter of modern impressionist works, in the French style.”

Her legacy, besides her paintings of light-filled interiors, women at leisure and still lifes, is her impact as a female artist – her success in her lifetime and continued celebration of her career; the growing recognition of her leadership in supporting women artists, including through formal organisations, and the path she left for others to follow and her contribution to Australian art, perhaps only now being acknowledged.[i]

Adelaide-born and with a Scottish background, Davidson studied art under Rose McPherson (later Margaret Preston) and exhibited with the South Australian Society of Arts in 1901-03. She travelled to Europe with Preston in 1904 studying briefly in Munich, before moving to Paris where she attended the Académie de la Grande Chaumière.  She exhibited at the Salon de la Société des Artistes Français and at the Société Nationale des Beaux-Arts in Paris at the height of fauvism in 1905. She was a founding member of the Salon des Tuileries.

She returned to Adelaide towards the end of 1906 and held a joint exhibition with Preston in March 1907. The National Gallery of South Australia purchased Davidson’s Portrait of Miss G.R. (ceramicist, Gladys Reynell) in 1908. Davidson returned to Paris in 1910, establishing a studio in Montparnesse, with only brief visits home in 1914 and 1950. At the outbreak of the First World War, Davidson hastened back to Paris and volunteered for the French Red Cross working as a nurse. She was forced to flee Paris during the Second World War, living in Normady, but able to return to her studio in 1945, where she remained until her death, aged 85.

As Tansy Curtin, curator of the Bendigo exhibition, notes, maintaining her artistic career in Paris and as a female artist depicting foreign landscapes, her friends and their domestic interiors, and still life subjects has meant Davidson has been sidelined from the Australian artistic narrative with its particular focus on the idiom of the Australian landscape.

Her continuing interest in light, atmosphere and colour and confident brushstrokes are evident in the paintings included in our Innovative Australian Women exhibition:

Still Life with Pears (the pears especially reminiscent of Cézanne) is a beautiful example of her thought-out composition, expressive brushstrokes, and harmonious use of colour. Like all still life subjects, stripped of any narrative, it is a painting about painting. “Visually rich in its handling of colour, texture, volume, composition and paint itself, its appeal to the senses extends to the scent of pears. … Still Life with Pears finds curve repeating curve, as all moves towards a painterly abstraction.” [ii] 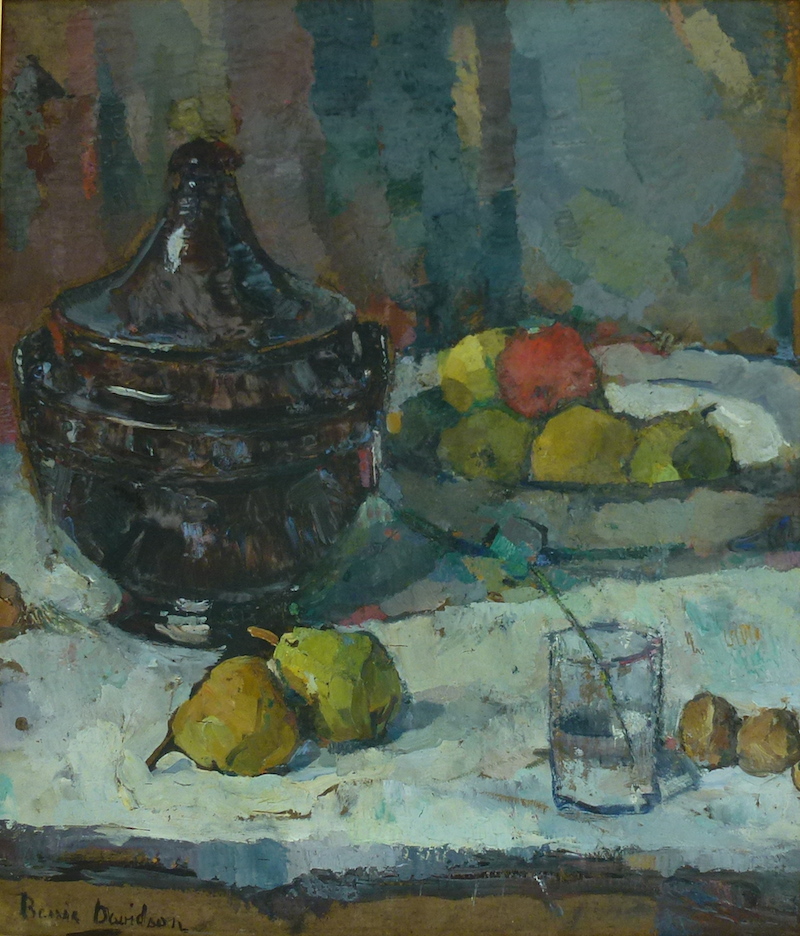 Still Life with Bowl of Fruit makes clever use of horizontal and vertical lines to focus the viewer’s eye and the unusual perspective … “where the viewer is made to feel as though they are seated at the table, across from their companion and about to drink tea and eat fruit.” [iii]

Laundry Boat on the River Seine c.1914 Many artists flocked to the vibrant cosmopolitan Paris in the early twentieth century, including a number of Australian women artists attracted by the proximity to international modernism, the more accepted status of women artists and the perceived social freedoms. “Davidson saw herself as belonging to the ‘modern French impressionist school’, combining the colour and light of impressionism with the more robust painting techniques of post-impressionism, and to a degree cubism, to illustrate everyday life in Paris” – capturing the day-to-day of her surrounds, such as the Laundry Boat on the Seine. [iv] 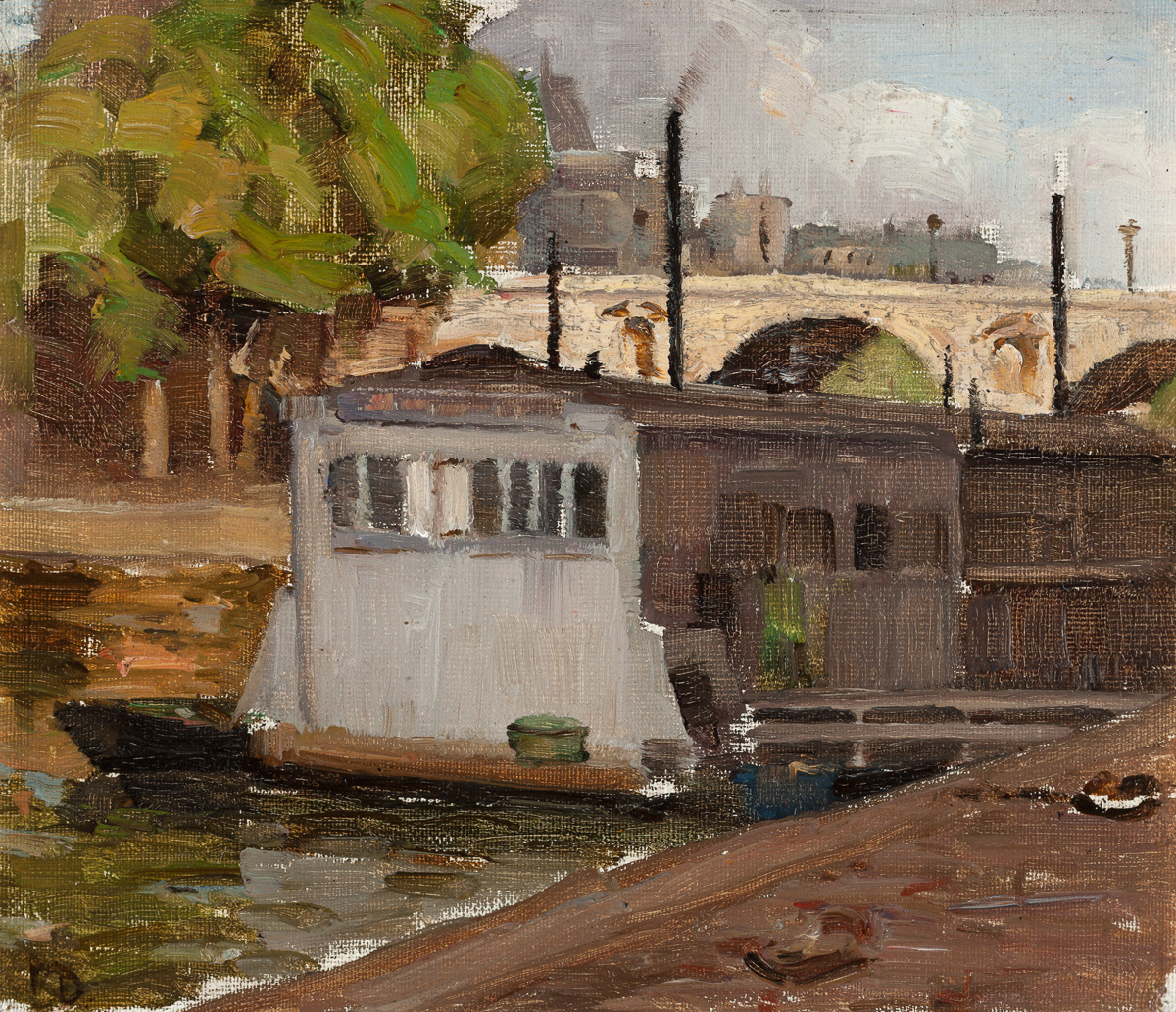