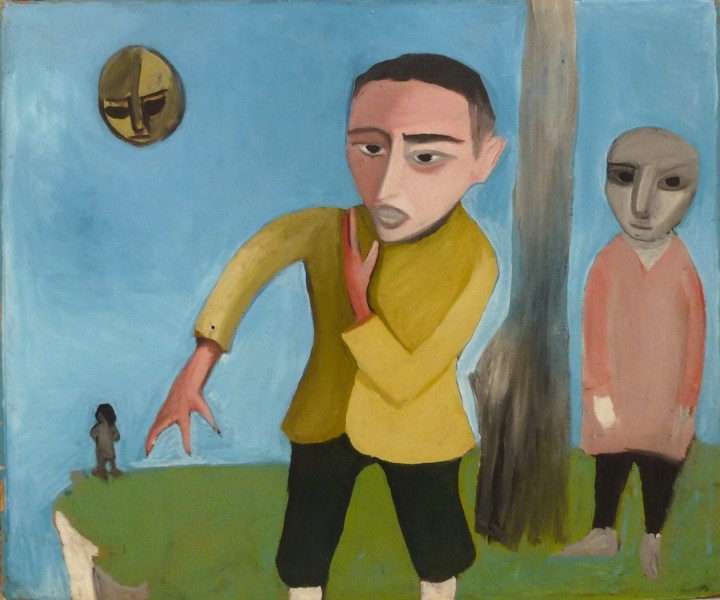 Welcome to IN THE SPOTLIGHT, where we continue to focus on artworks from our stockroom and provide some context around the work and its artist.

Robert Dickerson was self-taught as an artist, visiting the National Art Gallery of New South Wales and the Australian Museum as a boy, closely examining different artists’ techniques. At around 14 years of age, he worked as a factory worker and trained as a boxer, becoming a professional fighter at 15. He enlisted, aged 18, and served in the Royal Australian Air Force. Whilst waiting to be demobilized at the end of the Second World War, he drew and painted East Indian children in Morotai (a Dutch Island in the East Indies, now Malaysia). On Dickerson’s return to Australia, he began to paint, working with a limited palette and often using enamel on cardboard. Landscape with Figures was painted soon after Dickerson’s return, undertaken as an exercise in painting, and a continuation of his exploration of figures while utilising enamel. He held is first exhibition at Blaxland Gallery, Sydney in 1949. His reputation as an artist was established during the 1950s with the support of John Reed and of Rudy Komon, with whom he exhibited from 1959. He participated in the Antipodean exhibition in Melbourne in August 1959, the only Sydney artist. His figurative work portrays individuals in both urban and rural settings with an overriding emotional mood and psychological insight, all conveyed in Dickerson’s unique and recognisable visual language, one he continued with throughout his artistic practice, which lasted right up until his death, aged 91.

“Waiting many months in the islands to be demobbed after the war was over could have been a time of great tedium. But the Services library had given Bob a novel by Somerset Maugham, The Moon and Sixpence, and he realized that Gauguin chose a South Sea Island for a very good reason: there was no shortage of models. Bob began to draw and paint the children of Morotai. ‘They used to pose for me and sit playing while I drew them.’ In an interview with The Australian in 1969 he told Laurie Thomas he was moved to paint these East Indian children. ‘They used to come and clean up the tent for us, and climb up to get coconuts. They were so undernourished, thin and with that intensity that children have. I felt a great sympathy for these young kids – to see the way their parents were content with this primitive punched-around living. The children were anxious to evolve but nobody was helping them. They even taught us to speak Indonesian – pidgin Malay – and we taught them to speak English. That feeling about kids persisted in my work because I felt strongly about the children of the whole bloody world as a matter of fact, not the fat complacent little creeps, but the hungry ones.’ Bob thinks most of these paintings were lost in the jungle or given away. ‘I didn’t bring back any of these drawings or paintings, because it’s not easy to carry artworks in a kitbag.’

Further information:
Robert Dickerson – Landscape with Figures
Read other articles – In The Spotlight