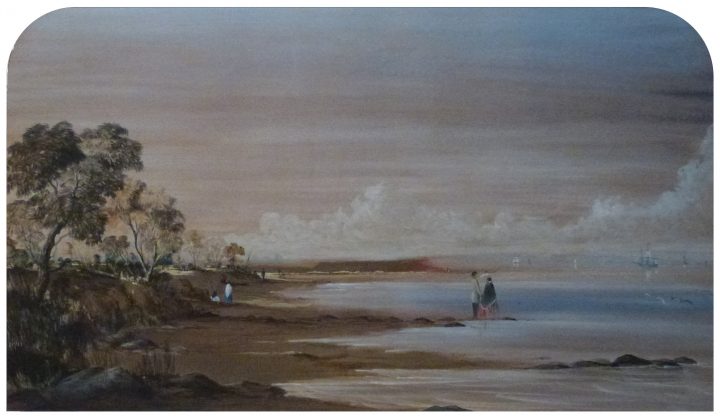 Thomas Clark painted several views around Melbourne including Red Bluff, Elwood. The area now known as Point Ormond was originally called Red Bluff in 1839 and a quarantine station was established there from 1840. Red Bluff was levelled in 1906 and used to fill in the swampy lands of Elwood.

Clark often used people in his landscapes to enhance the sense of the wonder of nature through the juxtaposition with small figures.  The dis-juncture of scale is here being used to emphasise depth, with large figures in the foreground, but the smaller figures probably being significantly smaller than perhaps expected. There is an element of artistic licence in this but it is also typical of Clark’s work.

Clark is a rather elusive figure and his work is rare. He was appointed the first Drawing Master of the School of Design at the National Gallery of Victoria in 1870 – 1876 where his students included Frederick McCubbin and Tom Roberts. An exhibition at Hamilton Art Gallery in 2013 brought greater focus and attention, showcasing his rather English sensibility, reflected in his subdued palette range, thin application of paint and moist atmosphere depicted in his artworks.

Learn more about this painting