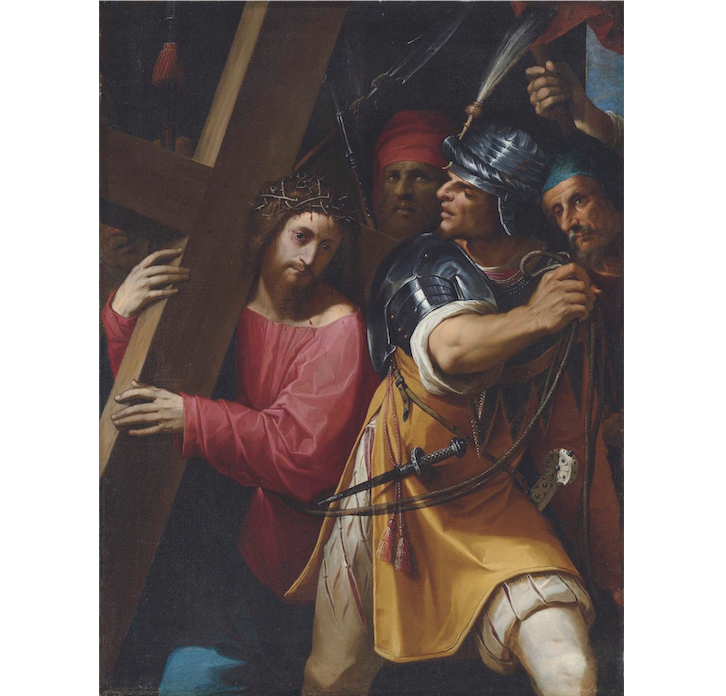 It is intended at an appropriate time to donate this work to the
National Gallery of Victoria, in memory of our gallery founder
Lauraine Diggins OAM who passed away on Good Friday,
the 19th of April 2019.

This dramatic depiction of Christ Carrying the Cross displays Ligozzi’s remarkable naturalism and highly accomplished rendering of detail. His controlled hand is evident in the haunting visage of Christ and the beautifully observed armour and weapons of the guard. The pommel of his sword exemplifies the often drawn comparisons between Ligozzi’s fastidious draughtsmanship and that of northern painters in Italy such as Hans Rottenhammer.

Jacopo Ligozzi moved to Florence from Verona in 1577, when he was appointed as court painter to Francesco I De’Medici the Grand Duke of Tuscany. He worked extensively for the Medici family until his death in 1627.  This hauntingly beautiful work was painted by Ligozzi early in the 17th century, and was acquired by private treaty from Christie’s London in 2016.

“As the successor of Giorgio Vasari (1511 – 1574) to head the Accademia del Disegno, Ligozzi also became an important source for the influence of Venetian art in Florence. With this Venetian influence of Color, it enhanced Ligozzi’s Mannerist painting style and sculpture-like figures, as influence by Michelangelo. Born in Verona to a family of artists and craftsmen, Ligozzi became a successful painter, illustrator, designer and miniaturist, active mostly in Florence. His father, Giovanni Ermanno Ligozzi (1572 – 1605), was also a painter, as was his brother Francesco and his cousin Francesco di Mercurio.

Before settling in Florence in 1576, he was an artist for the Hapsburg Court of the Austrian Empire in the city of Vienna. From this illustrious position, he found another in Florence with several patrons from the Medici family. Additional to his religious and mythological depictions, he also painted and drew several works of fauna and flora. These works were not just artistic decorations, but highly detailed depictions used for the scientific records of Medici patrons and the Italian naturalist, Ulisse Aldrovandi (1522 – 1605).

Ligozzi’s first important public commissions came in the 1590’s, notably two monumental historical scenes, painted on slate, for the Salone dei Cinquecento of the Palazzo Vecchio, completed in 1592. He painted altarpieces for such local churches as Santa Maria Novella, San Marco and San Giovannino degli Scolopi. He also painted altarpieces for churches elsewhere in Tuscany; in Bibbiena, Poppi, Arezzo and at Monte Oliveto Maggiore, and returned briefly to his native Verona around 1591. Ligozzi’s best-known works as a painter are, however, a series of seventeen lunette frescoes of scenes from the life of Saint Francis for the church of Ognissanti in Florence, completed in 1600. The artist became increasingly devout as he grew older, and among his late altarpieces is a Martyrdom of Saint Lawrence for the Florentine church of Santa Croce, painted in 1611. His last Medici commission was for a series of four paintings of the Passion of Christ, painted between 1621 and 1622 for Maria Maddalena of Austria, mother of the young Grand Duke Ferdinando II and co-regent during his minority.

A number of his religious paintings remain in situ in churches.

Ligozzi’s importance and versatility were recently the focus of an exhibition at the Pitti Palace in 2014:  Jacopo Ligozzi Pittore Universalissimo, Sala Bianca, Palazzo Pitti, Florence 27 May – 28 September 2014.