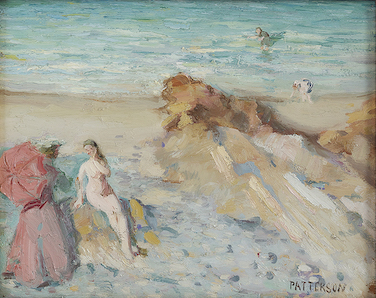 What a contrast to welcome summer for 2019 – snow in Victoria and Tasmania but bushfires in New South Wales and Queensland! So here are a few artworks to bathe in the warm glow of sunshine; feel calmed by the lapping of water or rest under shady trees and enjoy the long days of summer, at least in our minds…

Blackman captures the sunburnt outline of a beach bather, contrasted against the golden sand depicted in squares of burnished metal leaf. The simplicity of the figure’s graceful lines highlight Blackman’s skill as a draughtsman.

Boyd lived with his family at The Grange, Harkaway where the Berwick landscape was populated by hills and fields and pastoral farms as well as more wild areas of thick undergrowth and fallen gums.

In 1920-21 Bunny completed a series of richly coloured monotypes (painted on glass so only one unique impression is taken). Many of the works drew their subjects from mythology or orientalist interest, often featuring nudes completed in a decorative manner utilising complex and harmonious colour and pattern.

Andrew Sayers painted the landscape around the south coast of New South Wales over a number of years, including the picturesque wooden bridges. All painted en plein air, the works range from sunny depictions with lush vegetation and golden sands, to windy waves washing under the bridge, to minimalist imagery of the bridge pared back so the white posts seem to float in the air.