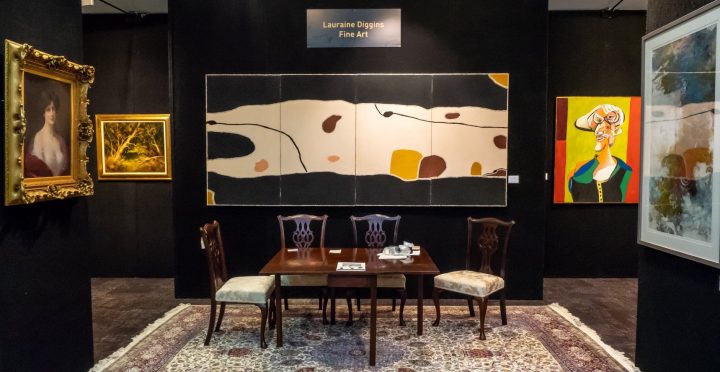 August is Art Fair season in Melbourne! Lauraine Diggins Fine Art again participated in The Melbourne Fair which was on show 9th-12th August at Caulfield Racecourse and showcased over 50 specialist dealers focussing on  fine art; furniture; decorative arts; books, prints and posters; jewellery; fashion and vintage couture. It has been described as an Aladdin’s cave of treasures with something for every interest.

Lauraine Diggins Fine Art exhibited a selection of paintings, sculptures and works on paper which are now on view at the Gallery, including artworks by Nicholas Chevalier; Ethel Carrick Fox; Andrew Sayers; Danila Vassilieff and Roland Wakelin.

Contrasting coastal scenes by Arthur Boyd and Elioth Gruner show the wilds of the sand dunes of the ocean (Ocean Beach at Rye, 1957) against the jewel-like light and atmosphere of a wide expanse of sand against rippling waves (Figures on the Beach, 1917).

A selection of indigenous painting included a striking four-panel ochre work by Freddie Ngarrmaliny Timms, (Jimbaline, 1994) including Doon Doon Station, a scene associated with atrocities committed by pastoralists, a timely work in the wake of the Colony exhibition at the National Gallery of Victoria.

We also exhibited a focus on Australian ceramics with works by Merric Boyd; John Perceval; Stephen Bowers and Zhou Xiaoping.

And gain an insight into the workings of an artist with Robert Clinch’s Dreamscape sculpture, depicting a playground day and night (complete with working streetlight) which features in his intricate lithograph pair of the same name.

It was a pleasure to see many of you at the Fair and to meet new friends of Lauraine Diggins Fine Art.