The Collectors’ Exhibition 2017 is an all-encompassing exhibition of Australian art, including artists from colonial to contemporary times and with a selection of indigenous artists. It is stimulating to explore the connections between such a diverse collection of artworks. This could be achieved by comparing works in the same medium (painting, sculpture, works on paper); looking at relationships between particular artists; examining the influence of travel; or exploring a variety of themes including landscape, abstraction, or the portrayal of the figure. For now, we invite you to take A CLOSER LOOK AT… the theme of Myths and Legends in our Collectors’ Exhibition 2017.

The idea of myths and legends applies to a number of artworks in diverse ways, from Greek tales (Leonard French’s The Kings) to Australian narratives, including heroic figures from the bush (Russell Drysdale’s stoic stockman confronting the viewer in Rain at Cattle Creek); Australian explorers (David Boyd Burke and Wills in the Desert); and the pioneering pastoralists surviving on the land (Artur Loureiro (An Australian Scene)).

The Australian landscape itself has a mythic and legendary status, from the indigenous perspective as seen in Elizabeth Kunoth Kngwarray’s majestic painting Yam Seeds and Flowers in My Grandmother’s Country to works like Herbert Gallop’s Hawkesbury River, reminiscent of Arthur Streeton’s iconic The Purple Noon’s Transparent Might.

Sometimes the myths and legends grow, sometimes they are constructed, like Stephen Bowers’ witty fictitious skulls which imagine the mortal remains of national types, like The Explorer Skull, projecting blue and white images across the bone china cranium.

Many of the artworks are populated by figures of myth and legend – Sydney Long Faun and Nymph and indigenous spirits – Nelson Maldjiwa Nayilbidj Mamandi Spirit Attacking Mimih Spirit. 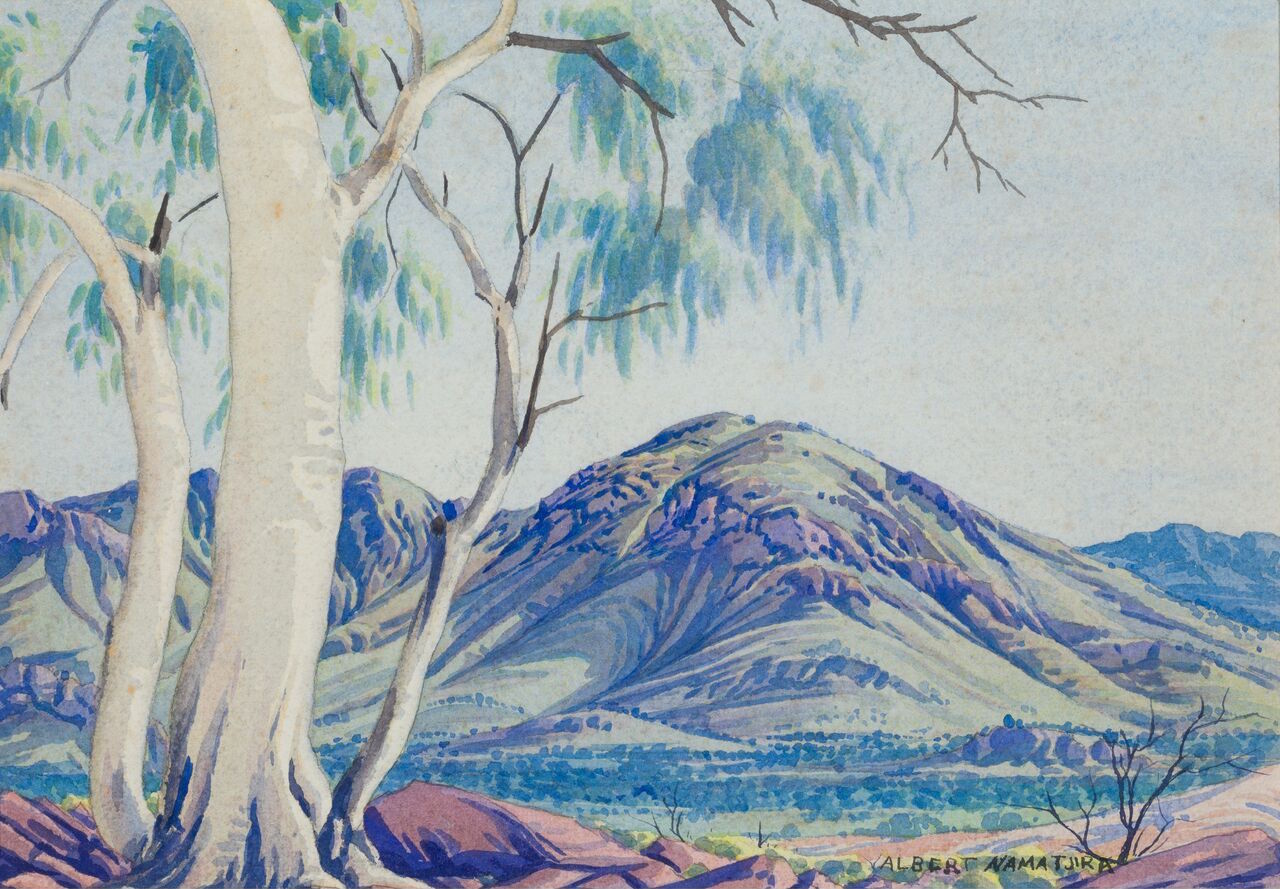 Another way of looking at myths and legends is when a specific subject becomes of significant importance for a particular artist, Fred Williams and the You Yangs and Upwey; Albert Namatjira and the Ghost Gums of Central Australia; or Charles Blackman and his series of Schoolgirls.

The idea of ‘myths and legends’ applies to a number of artworks in an assortment of ways. Firstly, Leonard French’s The Kings is based on actual myth and legend. In 1955, French created a series of paintings based on Homer’s Odyssey with the recurrent themes of epic narrative and the heroic. The Kings (originally three panels, with the whereabouts of the third currently unknown) was included in French’s exhibition The Odyssey Series at the Victorian Artists Society in 1955. French often drew from literary sources for his inspiration, including the Bible, Homer’s Odyssey and Iliad and the biography of Edmund Campion. Like the complex stories he has looked to, French’s paintings are intricate and layered – rich in colour and texture. The Kings features the use of painted glass in a mosaic effect, giving added strength to the geometric forms. 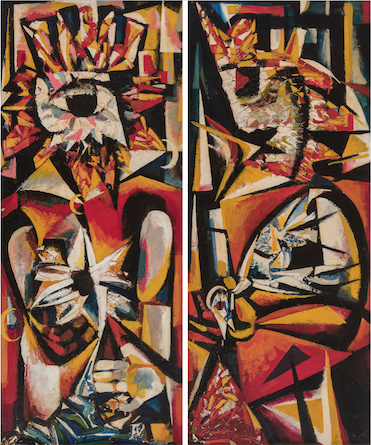 Following on from Greek myths, we look to Australian myths and legends. The theme of the hard-working pioneer in the harsh Australian landscape is clearly evident in Artur Loureiro’s painting we have titled (An Australian Scene). This dramatic large-scaled painting looks to the pastoralist industry and associated major sheep and cattle farming, wool manufacturing in particular recognised as building the nation. The feeling of nationalism is however balanced by the natural, plein-air feel of the landscape, with golden fields and scrubby clouds across the blue skies. However, this is a painting in the vein of McCubbin’s Down on his Luck rather than Roberts’ Shearing the Rams. The central focus of the painting is a group of distressed sheep, reluctant to abandon their fallen companion. The looming shadows from either side of the picture plane are echoed by the racing bushfire curling its way across the grass, and further alert us that this is no celebration of heroic pioneering achievements. It is an epic narrative inspired by the increasing culture of an Australian identity.

Another key Australian narrative is the Explorers, a theme favoured by a multitude of artists, from colonial examples where artists accompanied expeditions recording the travels and travails (see von Guerard’s Evening After a Storm Near the Island of St Paul’s (1854) showing the hardship of simply travelling to Australia); to modernist examples, Sidney Nolan’s infamous Ned Kelly and Albert Tucker’s cratered heads; to contemporary revisionist works, in particular where the indigenous point of view is given primacy.

The tragic story of the Burke and Wills expedition (1860-61) resulting in their demise, is of enduring appeal to artists. David Boyd produced a series of works of the explorers’ journey to the centre of Australia which was exhibition in 1958. He was not alone in looking to these legendary figures with fellow modernist artists Sidney Nolan and Albert Tucker also painting the subject in the mid-twentieth century. David Boyd’s painting Burke and Wills in the Desert is uncompromising in its imagery with a heightened sense of narrative achieved through his striking use of rich colours. 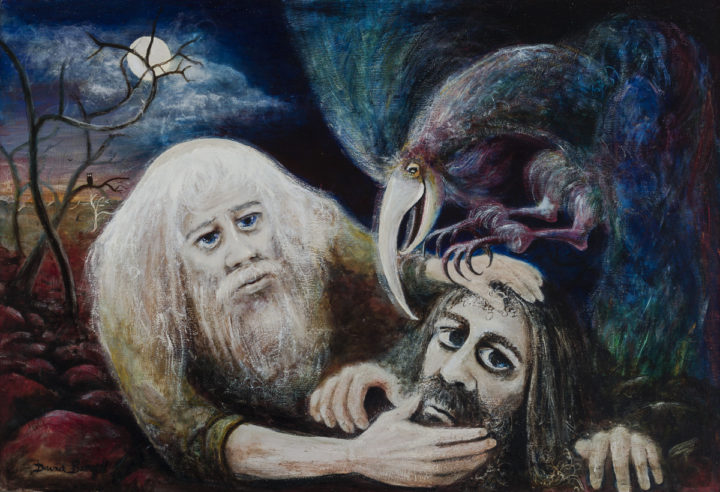 Myths and legends can grow from an earthy reality or can look to more spritely creatures. Sydney Long was keen to develop Australian allegorical characters and the ‘creation of an imaginative school that will be truly Australian.’ [1]   Although Faun and Nymph may have its roots in the Greek mythology of Pan, it is painted by an artist whose work sought to create an Australian mythology, the bush setting and dazzling Australian light predominant. Long is considered Australia’s leading symbolist artist and Faun and Nymph is believed to be the last of his major art nouveau painting remaining in private hands. 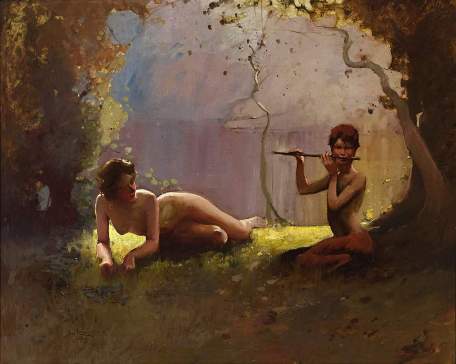 Of course, artists themselves create their own myths and legends, where their work becomes synonymous with a particular subject – think Whiteley and Sydney Harbour; Nolan and Ned Kelly and Blackman and his Schoolgirls 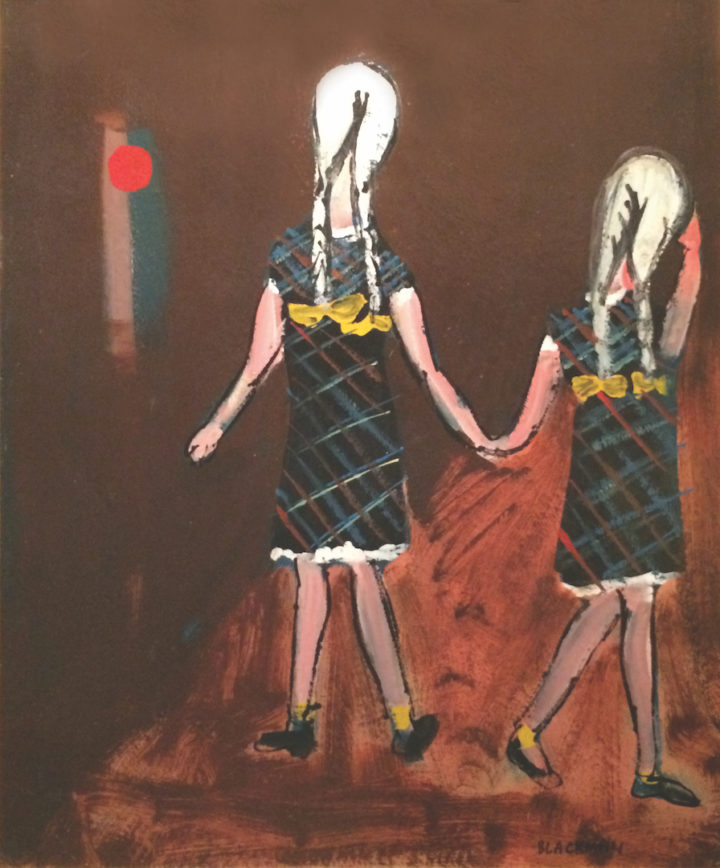 Sisters at the Crossing (1952) is painted very early in the series of Charles Blackman’s Schoolgirl paintings, a theme which continued to interest him throughout his career and celebrated by the recent exhibition at Heide Museum of Modern Art, Charles Blackman Schoolgirls, in which this painting was included. It is strongly marked by an uneasiness present in many of Blackman’s work, straddling innocence and danger.

“Sisters at the Crossing, perhaps more powerfully than any other early painting in the series, strongly conveys a sense of alienation within an urban environment, where the two girls are silhouetted against a murky brown background and are eerily illuminated from behind.” 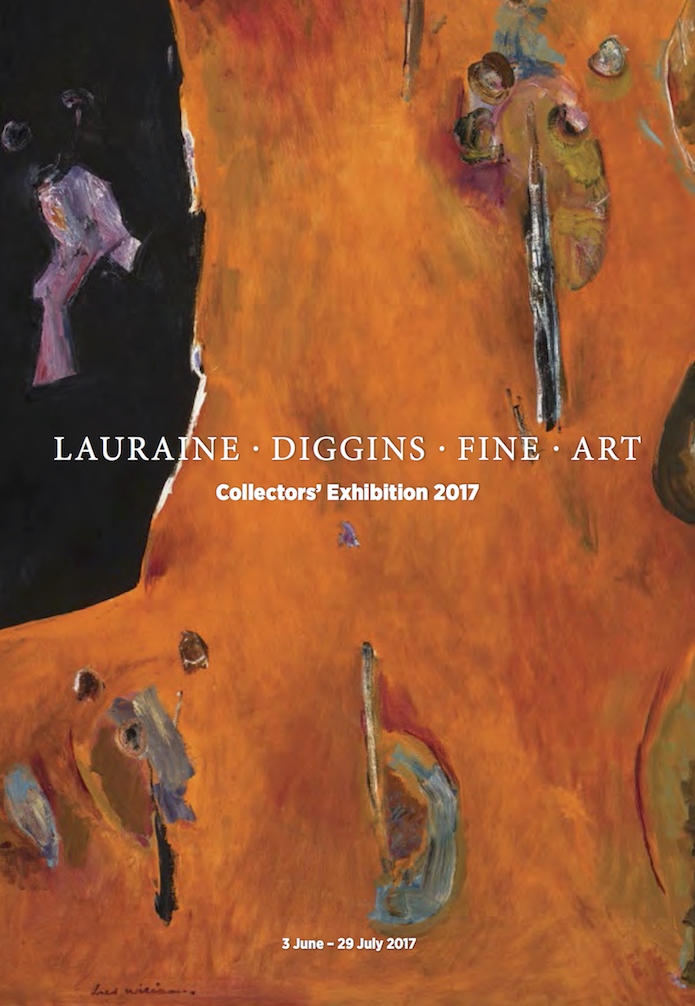 To take A Closer Look… at the paintings mentioned, we invite you to read the essays in our catalogue which can be viewed on our website here.

The Collectors’ Exhibition 2017 is showing at Lauraine Diggins Fine Art until 29 July.

View on our website www.diggins.com.au  the on-line exhibition; listen to the opening speech by Doug Hall and download the catalogue with essays by leading scholars.