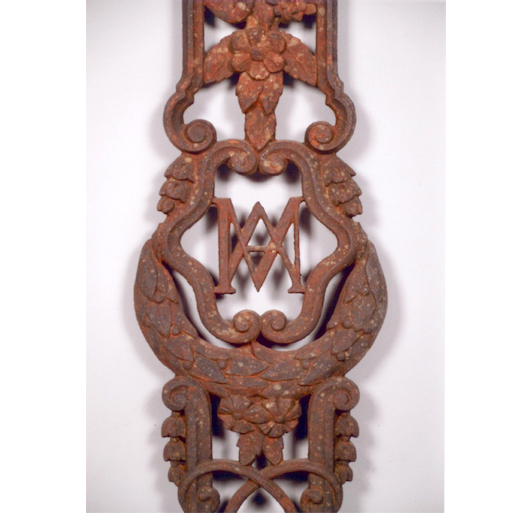 Mother Mary MacKillop died in August 1909 and was buried at Gore Hill cemetery, North Sydney where her grave was believed to have been marked with a marble stone and decorative iron cross. In 1914 she was exhumed and moved to the newly completed Mary MacKillop Memorial Chapel in Mount Street, North Sydney. As with the original tombstone, the new vault was a gift from Joanna Barr Smith (nee Elder). Mary MacKillop had met Joanna and her husband Robert Barr Smith within the first few years of her founding the Order of the Sisters of Saint Joseph and the two women became life-long friends.

The original headstone and cross for Gore Hill appears to have been retained by Joanna as a memento and both were later located at the Barr Smith family home in Adelaide. Her elder son Thomas, inherited Birksgate from Joanna’s brother, Sir Thomas Elder. It was at this location that the headstone and cross were located in 1972 when the contents of Birksgate were sold by public auction.

The cross and the marble headstone were separated around this time, with the headstone being acquired by South Australian collection, David Roche, and used as a plinth for a sculpture in Roche’s garden until the mid 1990s when its significance was discovered by the gardener. The cross has remained in the collection of the purchaser at the auction at Birksgate.  Saint Mary of the Cross was canonised as Australia’s first saint in 2010.