Shorty Lungata Tjungarrayi was born at Walukuritji, south of Lake MacDonald. His country lies south?west of Kintore in the Great Western Desert. Around 1948, he arrived at Haast Bluff from the desert and later was a founding member of the Papunya painting group. He was quiet and understated; and as Geoffrey Bardon recalled, spoke little English. From the outset, his work was bold and intense reflecting his reputation as a senior Pintupi man respected for his ceremonial authority; and was renown for his dancing and hunting skills. He continued to yearn for his homeland and in the early 1980s moved to Kintore. Amongst the images he created are Bush Banana, Blue-Tongue Lizard, Goanna, Snake, Bandicoot Dreaming and children?s stories. Shorty was included in the seminal exhibitions ''Face of the Centre'' and ''Dreamings''. 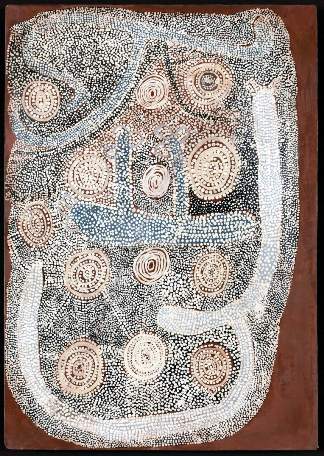