Owen Yalandja is a senior member of the Dangkorlo clan, the custodians of an important yawkyawk site.

The water spirits called yawkyawks of ''Ngalkunburriyaymi'' are like mermaids. In the Kuninjku language, yawkyawk can also mean "young woman". In their mermaid form, yawkyawks are female spiritual beings, usually associated with powerful conception sites, within a clan's country.

This dreaming place is so significant that the Dankorlo clan custodians have set up their outstation community near the site and the identity of this group is very much related to their yawkyawk dreaming for which they have spiritual and practical responsibilities.

Owen's art almost exclusively deals with the representation of the yawkyawk spirits near ''Barrihdjowkkeng'', usually depicted with the tails of fish. Another name used to describe these figures is ''ngalberddjenj'' which literally means "the woman who has a tail like a fish".

Yawkyawks have long hair which is associated with trailing blooms of green algae found in freshwater streams and rock pools. At times they leave their aquatic homes to walk about on dry land, particularly at night. 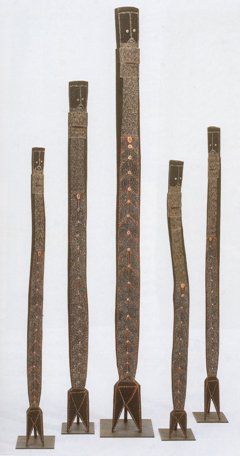