Margaret Preston was born Margaret Rose McPherson in Port Adelaide, 1875. She studied at the National Gallery School, Melbourne in 1893 and at the Adelaide School of Design, Painting and Technical Arts in 1898. In 1912 she took pottery class in London and in 1938 again studied in London at a decoration school. Throughout her life she travelled extensively first going to Europe in 1904 and then throughout Australia, the Middle East, Africa, Europe and the Pacific Islands. Accordingly, her are reflects the influences of these cultural experiences. There are elements of Japanese and Chinese principles of design, primitivism, and foremostly, European modernism, which she explored during her travels and instruction in Paris, Munich and London, liberally incorporated in her work.

During the interwar period Preston was increasingly influenced by Australian indigenous art, believing that it was only through Aboriginal visual culture that we would be able to create a truly national artistic identity. It is noteworthy that Preston was essentially the first artist to recognise the importance of the Australian Indigenous aesthetic, employing flattened planes, strong forms and eliminating highlights in her works. She adopted Aboriginal motifs and mixed these with more Western style imagery, often presenting aerial views as well as side views of an animal set in a slightly flattened landscape. These works use a more restrictive palette.

She brought this economical, graphic analysis of form into the domestic sphere, validating the domestic sphere through modernist execution.
Preston was to played a significant role in the formulation of Australian modernism, working not only as a painter, and wood and lino cut printer, but also as an influential teacher of both practical and theoretical art. She was an acclaimed figure within the Sydney art scene from the 1920s onwards, and significantly, only she and Thea Proctor were the only women to be featured in Sydney Ure Smith's Art in Australia magazine, during the first half of the twentieth century.
She is renown for her richly coloured still-lifes adorned with native flowers, birds which delighted her buyers and bold landscapes which are marked by a particularly decorative exploration of design. Her work is bold, vigorous and often inventive. Although she claimed 'In my flower pieces it is the form that I wish to emphasise, and I use only the simplest of earth colours, so that the mind will see before the eye', (1) to the viewer many of these works come across as highly colourful and bright. In the bush landscapes, Preston has reduced her palette. 'I am trying to find one form that will suggest Australia in some way...I am trying to simplify my colour to my form...Australia is a country that gives the impression of size and neutral colour. To give this impression...I find it necessary to eliminate 'dancing' colour and heap my light and shadows...In my effort to give a feeling of sharp flatness I force my compositions with as much solid light as possible. I am trying to suggest size and to do this I am eliminating distracting detail'. (2)

''The Face of Australia'', touring

''Art and the West'', Art Gallery of New South Wales

''The Art of Margaret Preston'', Art Gallery of South Australia

Exhibits at the Royal Academy and the New English Art Club, London

During her lifetime Preston also exhibited in the annual shows of the Society of Artists, Sydney and the Art Association of Australia, Melbourne 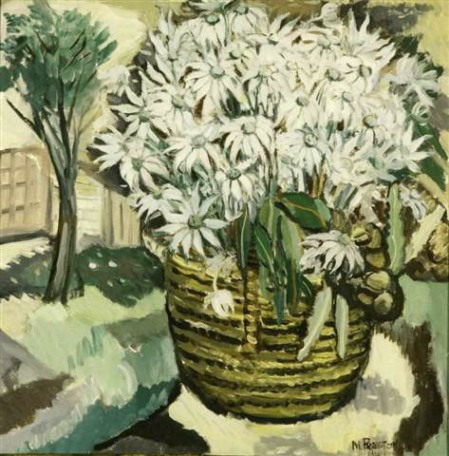