Joy Hester, in what we may now see equally in her life as in her art, has come to re-order our perception of the early years and the later effect of the modern movement in Australian art.

From that movement's start in the later 1930s, Sidney Nolan, Albert Tucker, Noel Counihan, and others, carried its main public burden and thrust. Hester, as much at the heart of it as anyone, stayed for some time on the periphery.

One reason perhaps is the social disability which constrained, certainly not the sensibilities and the imaginations, but is some measure the applied energies and aims of women in the public sphere at that time.

A 1937 photograph of the so-called Australian Academy of Art's launching shows nine men flanking the initiator R.G. Menzies and a woman squeezed in to one end. In 1943, the avant-garde journal Angry Penguins published a drawing of Hester's and introduced her to readers as 'A peroxide blonde in her early twenies', before touching on more serious attributes - an exercise in 'tokenism' as gratuitous as it was ill-phrased.

An egregiously different constraint on Hester was her learning in 1947 that she had Hodgkin's Disease, and little prospect of living beyond a further two years. Withal, however, what mainly kept the young Hester a step aside from her youthful peers was not a constraint but a strength.

"What you had to be", Hester said when she was nineteen, "was not just one more Picasso or Miro but yourself."

There was no egotism in this remark, as Hester was just about the most spontaneous and the least self-serving person I have known. What she meant was that we, each of us, owed it to the simple but miraculous fact of individuality to render in our art or what ever was our chosen field, the most faithful and worthwhile account we could of that individuality as we lived it.

Hester died, not within the predicted two years, but thirteen year later, at forty. By that time, she had given us a body of work that was strikingly individual and radical in conception and declaration, unique in how for the first time it placed a powerful feminine aesthetic sense at the heart of the overall rejuvenation of the Australian cultural vision which surrounded her. 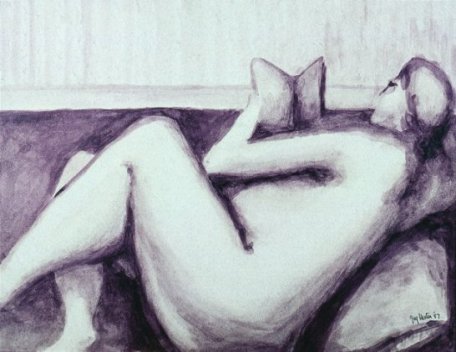