Perceval is recognised as one of Australia's most talented living artists. He holds the Office of the Order of Australia. His work is held by all major public galleries. He has won the John McCaughey, Vizard Wholohan and was joint winner of the Wynne with Dairy Farm in 1960.

Perceval and his elder sister were born on a 2400 hectare wheat and sheep property in WA. His early childhood was disrupted by parental divorce and so he spent time between the two homes until 1935 when he settled with his mother and step father in Melbourne. His childhood was further disrupted in 1938 with a bout of polio which incapacitated him for over a year. During the war he became an active member of the Angry Penguins and married Mary Boyd. Most of his life has been spent in Melbourne although in the early sixties the Percevals spent two years in London living near the Boyds and Blackmans and then a further year in Canberra. In the late sixties Perceval recognised an alcohol dependency and subsequently spent periods in hospital.

Perceval's art is very painterly. He likes to produce series and when he works appears to literally attack the canvas. He said, "Children are the real world. I have fought adulthood all my life"^ and this perhaps best sums up the wonderful imagination and the unwavering clarity in vision he presents in so much of his work: the knowledge of youth - the surety of being right.

An early influence on Perceval was Arnold Shore, who he met as a teenager and was interested in the heavily laden brush of unmixed colour used by Van Gogh. Other notable influences are Bosch, Brueghel, Tintoretto, El Greco, Rembrandt, Hogarth and Blake and as with many artists a lot of the work has reference to personal and childhood experience. Perceval covers most genres; his work includes landscapes, such as the Williamstown Series, religious and irreverent themes and some portraiture. His best periods are the forties and fifties when his paintings included The Nightmare and Mask Series, master-pieces like Negroes at Night, 1944, and Woman Pushing a Boy with Polio, 1943 where he uses repetitive brush strokes with each stroke laid side by side as seen in work by some of the Fauves. In the fifties, Perceval painted the Gaffney Creek Landscapes and the humorous Goat in a Cabbage Patch, 1956 where he uses many different textures of brushstroke as well as the drip application in quite illogical colours, which enhances surface quality.

Perceval is also a gifted ceramicist. The Angels are wonderful, small (22-48 cm) and exquisitely delicate, in contrast to the loose brush-stroke, spontaneous and often crude appliance seen in the paintings. Like Rembrandt, he brings these heavenly creatures down to earth and accompanies them with what Kenneth Clark has called the "life giving roughage of the grotesque".^^ Perceval said inspiration came from his kids, myth and life.

^Reid, B., Of Dark and Light the Art of Perceval, National Gallery of Victoria Melbourne, 1992, p3

^^Reid, B., Of Dark and Light the Art of Perceval, National Gallery of Victoria Melbourne, 1992, p24

Reid, B., Of Dark and Light the Art of Perceval, National Gallery of Victoria Melbourne, 1992 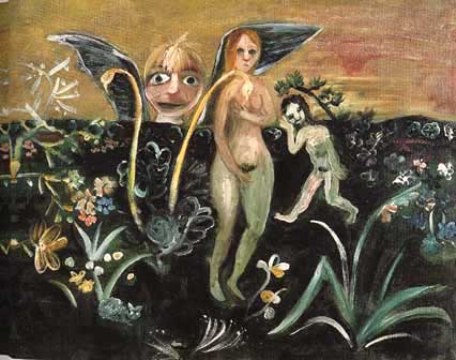