Isobel 'Iso' Rae undertook studies at the National Gallery School, under the tutelage of George Folingsby (Painting) and Oswald Rose Campbell (Design), consistently receiving honours for her work. She exhibited with the Victorian Academy of Arts from 1881 -83 before moving to France with her mother and sister in 1887. Here she attended the Academie Colarossi and by the early 1890s the family settled in Etaples, a picturesque fishing village on the coast of northern France, home to a vibrant expatriate arts community, where she crossed paths with fellow NGV students Rupert Bunny and James Quinn.

Rae continued on occasion, to show her work in Australia and gained recognition with inclusions of her work in the Old Salon, Paris and Royal Society of British Artists, London. Her work shows the influence of impressionist and post-impressionist concerns encountered in Paris at this time. Rae’s paintings en plein air, focussed not only on landscape but to the people of the area. In 1892, the Society of Friends of the Arts of Etaples was established, a group with which Rae exhibited.

Iso Rae was a skilled draughtsperson, her marks lively and capturing a spontaneity, yet balanced with thought-out and balanced compositions. She produced around 200 drawings, mostly pastels and gouache, depicting the daily life of the military camp at Etaples, with its soldiers in their various uniforms; the barracks; the hospitals; the prisoners, both German and allied; their accommodation; the horses; their training and recreation (football, cinema, theatre).

Despite the official appointment of nearly twenty Australian male war artists, Rae was one of only two Australian women who documented the war for many years (the other artist was Jessie Traill who spent the war working in a military hospital).

Etaples during the war was a place of transience and was not immune from the full threat of war, experiencing multiple air raids (the Rae sister’s house was bombed). Iso and Alison left France for  St Leonards in Sussex, England in 1932 with the rise of Hitler, and Iso died in 1940 in Brighton Mental Hospital, perhaps the effects of war remaining with her.

The photograph shows Iso Rae with a group of soldiers at the Cinema Office, Etaples  (as reproduced in Betty Snowden's article in the Australian War Memorial magazine, 1999, p.37 Iso Rae with soldiers at Etaples - © Musée Quentovic d’Étaples. Coll° A. Caron).

1881-1883
exhibited with the Victorian Academy of Arts

1883
NGV students’ exhibition, the jury made special mention of her work and she received further honours in 1884 and 1886

1889-90
included in the New Zealand and South Seas Exhibition, Dunedin

exhibited Old Salon, Paris and with the Royal Society of British Artists, London.

1898-1907
exhibited with the Society of Oil Painters, London

Snowden, Betty, Iso Rae in Etaples : Another perspective of war, Wartime : official magazine of the Australian War Memorial, 1999, no. 8, pp36-41 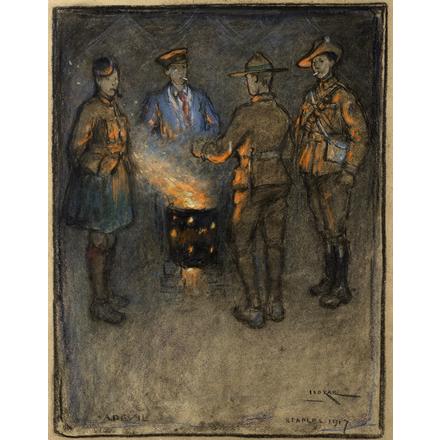 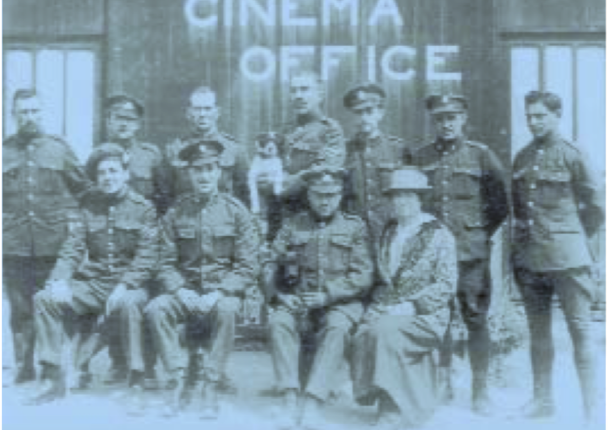