Arthur Merric Bloomfield Boyd is one of Australia's most prominent artists. His work is respected and traded in major international art venues and held in public galleries throughout Australia and overseas. He has represented Australia twice at the Venice Biennale, has been awarded the H G Richards Memorial Prize, 1963, honoured with the Order of Australia for services to the arts and the Companion to the Order of Australia. Boyd is also an accomplished sculptor and ceramist and was responsible for the design of the tapestry in the reception hall at Parliament House, Canberra.

Arthur Boyd was born into a family of artistic renown. His grandfather, Arthur Merric Boyd was a New Zealand landscape artist who settled in Australia in 1886,while his grandmother Emma Minnie, a member of the A'Beckett family, was an accomplished painter. Both paternal grandparents exhibited at the Royal Academy, London and Arthur Merric taught his grandson the skill of landscape painting in the Heidelberg tradition. Boyd learnt ceramic art from his father, Merric Boyd while family life revolved around art and religion.

At the age of 17 he held his first exhibited at the Seddon Gallery in Melbourne. He was soon to move away from the light-toned, blue and gold palette style of the Heidelberg School to a darker palette using freer more expressive brush strokes. In the early forties Boyd came under the influence of social realist, Yosl Bergner, and took painting lessons from Danila Vassilieff, an expressionist artist. He was an active member of the Angry Penguins and shared a studio with John Perceval. The paintings of this time already exhibited a Boyd characteristic: tension experienced on margins, such as the boundary of sex/love, love/loathing.

In 1945 Boyd studied the European Masters especially Brueghel and Bosch and later Rembrandt. Religious themes became prominent in the work although he gave them contemporary pertinence and universal significance and they were often sited in local landscape. In 1948 he commenced a magnificent series of landscapes based around the Wimmera which won him the respect of the Australian cultural establishment.

In the early fifties, Boyd turned much attention to ceramics and produced some of his finest sculpture. In 1956-57 Boyd painted the much acclaimed Bride Series which bought him international attention and arguably, is his best work. These important Chagall-like allegorical paintings also known as "Love, Marriage and Death of a Half-Caste", were made from observations during a trip from Alice Springs to Arltunga in 1951 and are concerned with the problems facing half-cast Aborigines and poverty. Boyd was one of the seven artists who contributed to the controversial Antipodeans exhibition, 1959 which defended form and figuration and questioned the all
encompassing conversion to abstract expressionism.
In 1960, Boyd moved to London and from 1970 divided his time between Britain, Tuscany and the Shoalhaven River, NSW. His work continued to include landscape and mythology - religious and allegorical. He has designed and painted sets for major London productions.

1974
Drawings and Prints from the Permanent Collection, National Gallery of Victoria, Melbourne.

1984
Art and Social Commitment: An End to the City of Dreams, Art Gallery of New South Wales.

1980
Australian Drawings of the Thirties and Forties, National Gallery of Victoria, Melbourne.

1956
The Arts Festival of the Melbourne Olympic Games'', National Gallery of Victoria, Melbourne.

ACHIEVEMENTS
1995
Australian of the Year in recognition of his contribution to Australian art and to the community.

1992
Companion of the Order of Australia

1988
Irish-Australian of the Year

1979
Order of Australia (OA) for services to art

McGrath, S., The Artist and the River: Arthur Boyd and the Shoalhaven, Bay Books, Sydney, 1982 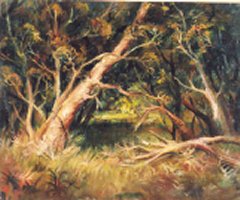