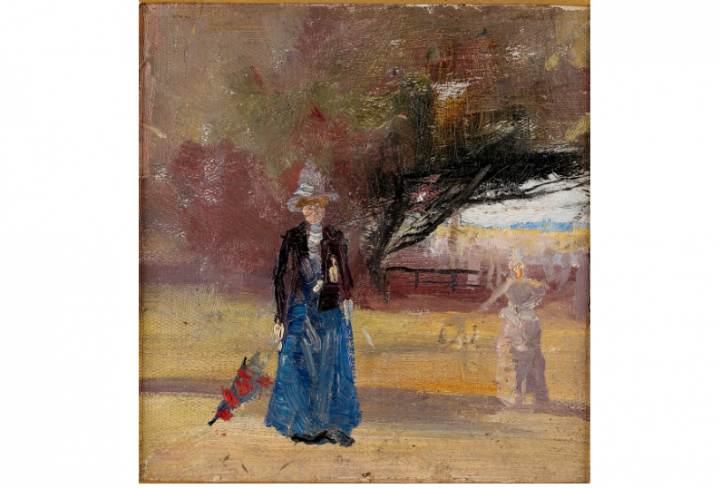 This small, rapidly painted sketch belongs to Conder’s Melbourne years (1888-90) and is typical of his en plein air style. This was a style, developed in the ateliers of Paris and in the summer painting ‘camps’ of rural France in the 1870s that involved the artist capturing and holding the essence of the moment and the scene as he or she stood in front of it. The first marks put onto the canvas were to be the only ones: nothing was to be altered or worked over later, back in the studio. The heart of plein air painting was truth to the moment of vision. Stylistically it was characterised by clarity of vision, an understanding of technique and  poetic response to the moment.

Subject is thus everything and nothing. Miss Raynor, the principal female figure in this sketch is essential for the articulation of the work but only as a form to set against other forms – the heavy cypress tree behind her, the post and rail fence, the smoothness of the gold greens and brown of the paddock in which she stands. Her everyday dress adds to the prosaic note of the sketch, the drab attire enlivened by a few touches of red on the unfurled umbrella at her side.  Behind her stands a second female form, painted even more ethereally in relation to the raking light that falls from left to right across the picture plane and is even less identifiable.

‘Mrs (sic) Raynor was a student friend of Conder and was sketched by him during a picnic outing in Melbourne during his stay there (1889)’. She seems to have modelled for Conder on other occasions. Another study of her, an oil on cedar panel, in which she wears a  rather more elaborate costume and is seated on a river bank, is to be found in the Joseph Brown Collection.

Charles Conder is acknowledged as one of Australia’s most talented artists and is widely recognised in collections by all major Australian public galleries as well as international public galleries.

Read other – In The Spotlight